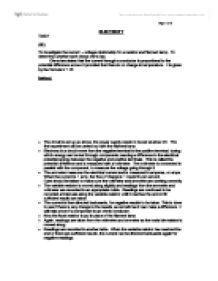 Investigate the current - voltage relationship for a resistor and filament lamp. To determine whether each obeys ohms law.

To investigate the current – voltage relationship for a resistor and filament lamp.  To determine whether each obeys ohms law.

Ohms law states that the current through a conductor is proportional to the potential difference across it provided that there is no change in temperature.  It is given by the formula V = IR

Care should be taken to make sure the voltmeter and ammeter are working correctly.

The graph for the filament lamp produced a curved line showing no proportionality and that the lamp is not an ohmic conductor.  A resistance cannot be calculated because it is not constant.

The graph for the fixed resistor produced a straight line.  Which means the current – voltage relationship is proportional and it is an ohmic conductor.  A resistance can be calculated because it is constant.

Ohms law is only applicable when the temperature is kept constant.  The graph for the filament lamp had a curved line.  The filament got hotter as the current increased and therefore the resistance increased.  Because the temperature and current were not constant, the filament lamp is not an ohmic conductor.  The gradient of the curve is very small at the beginning showing that there is little resistance.  However as the current increases, the gradient of the curve increases too.  The resistance is changing due to this change in current and temperature.

Overall it is possible to determine two main things.  Firstly, the filament lamp is not an ohmic conductor, and secondly, the resistance becomes more constant as the current increases.

The potential divider is used to supply a variable p.d.  Therefore a desired level can be obtained.  The potential divider can allow the voltage across a component to be varied continuously between 0v and the battery voltage by use of a sliding contact.  Whereas a rheostat varies the resistance, it is designed to resist current flow.  Because it has a maximum resistance it does not allow the voltage across a component, or the current through it, to be reduced to zero.  A rheostat is also quite bulky and dissipates the surplus energy in the form of heat so it can get very hot.

Current is constant in series circuit = 0.9a

Need to find the total resistance of the parallel resistors

Equation for 2 parallel resistors must be rearranged to find r.