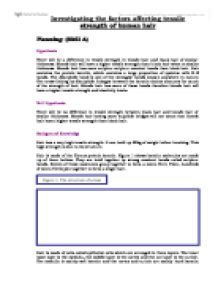 Investigating the factors affecting tensile strength of human hair Planning: (Skill A) Hypothesis There will be a difference in tensile strength in blonde hair and black hair of similar thickness. Blonde hair will have a higher tensile strength than black hair when at similar thickness. Blonde hair has more sulphur-sulphur covalent bonds than black hair. Hair contains the protein keratin, which contains a large proportion of cysteine with S-S bonds. The disulphide bond is one of the strongest bonds known anywhere in nature. The cross-linking by disulphide linkages between the keratin chains accounts for much of the strength of hair. Blonde hair has more of these bonds therefore blonde hair will have a higher tensile strength and elasticity levels. Null Hypothesis There will be no difference in tensile strength between black hair and blonde hair of similar thickness. Blonde hair having more sulphide bridges will not mean that blonde hair has a higher tensile strength than black hair. Background Knowledge Hair has a very high tensile strength. It can hold up 60kg of weight before breaking. This high strength is due to its structure. Hair is made of the fibrous protein keratin. Figure 1 shows keratin molecules are made up of three helices. They are held together by strong covalent bonds called sulphur bonds. Eleven of these molecules group together to form a micro fibril. Then, hundreds of micro fibrils join together to form a single hair. Hair is made of cells called epithelial cells which are arranged in three layers. The inner most layer is the medulla, the middle layer is the cortex and the out layer is the cuticle. The medulla is mainly soft keratin and the cortex and cuticle are mainly hard keratin. This structure has great strength. The cuticle, the outermost layer, is where you find a lot of the protein keratin. The cortex is the thickest middle layer, providing strength and defining colour of hair. ...read more.

It was sometimes hard to distinguish between brown and blonde. This was the same for blonde hair. This would have an affect on the reliability and precision of my results making the accuracy of the strengths of different colours of colours of hair inaccurate. There should have been a certain shade of colour of hair (same amount of melanin in each brown hair) used for each colour sample. My conclusion will be imprecise because brown or blonde hair shades could cause incorrect results and make my conclusion incorrect. * The 10g mass is a limitation as the hair could break at lower masses than they actually did, for example a hair that broke at 50g could have broken at 41g, but I wouldn't know that as I only used 10g masses. So, I got false readings implying the hair is stronger than it actually is. If smaller masses were used my results would be much more accurate to make my conclusion reliable. This limitation could cause my conclusion to be invalid, causing the hairs strength and point on breaking higher or lower than it actually is. Conclusion After doing my statistical test I can reject my null hypothesis and accept my hypothesis and say that brown, blonde, ginger and black hairs differ in tensile strength. I have proved this difference in my calculations, mainly in graphs 1 and 6. From my results I can see that darker coloured has a higher tensile stress compared to lighter coloured hairs. In my hypothesis I said that lighter coloured hair would have a higher tensile strength than darker coloured hair, due to lighter coloured hair having sulphur-sulphide bonds, which are very strong. I have disproved this. Through testing all four colours of hair I can see that these strong sulphur bonds do not reflect any tensile strength qualities. Lighter coloured hair does not have an advantage over dark coloured hair when it comes to tensile strength. It mainly depends on the type of melanin the hair contains. The denser the melanin quantity is the stronger the hair. ?? ?? ?? ?? ...read more.