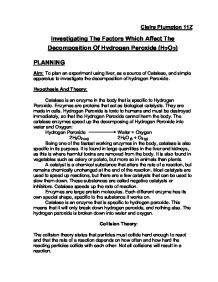 Investigating The Factors Which Affect The Decomposition Of Hydrogen Peroxide (H2O2)

Claire Plumpton 11Z Investigating The Factors Which Affect The Decomposition Of Hydrogen Peroxide (H2O2) PLANNING Aim: To plan an experiment using liver, as a source of Catalase, and simple apparatus to investigate the decomposition of hydrogen Peroxide. Hypothesis And Theory: Catalase is an enzyme in the body that is specific to Hydrogen Peroxide. Enzymes are proteins that act as biological catalysts. They are made in cells. Hydrogen Peroxide is toxic to humans and must be destroyed immediately, so that the Hydrogen Peroxide cannot harm the body. The catalase enzymes speed up the decomposing of Hydrogen Peroxide into water and Oxygen: Hydrogen Peroxide Water + Oxygen 2H2O2 (aq) 2H2O (l) + O2 (g) Being one of the fastest working enzymes in the body, catalase is also specific in its purpose. It is found in large quantities in the liver and kidneys, as this is where harmful toxins are removed from the body. It is also found in vegetables such as celery or potato, but more so in animals than plants. A catalyst is a chemical substance that alters the rate of a reaction, but remains chemically unchanged at the end of the reaction. Most catalysts are used to speed up reactions, but there are a few catalysts that can be used to slow them down. These substances are called negative catalysts or inhibitors. Catalase speeds up the rate of reaction. Enzymes are large protein molecules. Each different enzyme has its own special shape, specific to the substance it works on. Catalase is an enzyme that is specific to hydrogen peroxide. This means that it will only break down hydrogen peroxide, and nothing else. The hydrogen peroxide is broken down into water and oxygen. Collision Theory: The collision theory states that particles must collide hard enough to react and that the rate of a reaction depends on how often and how hard the reacting particles collide with each other. ...read more.

Range & Number Of Observations: I shall perform the experiment 2 times at each temperature between 10�C and 70�C inclusive, at intervals of 10�C. This ensures that the results are accurate and reliable. OBTAINING EVIDENCE I used my equipment following my safety guidelines outlined in my plan. I recorded results at intervals of 10�C, from 10�C to 70�C inclusive. I did this so that I would have enough results to analyse and form a conclusion. I recorded my information in the tables in the next few pages. I used my equipment accurately, measuring to the nearest 0.5mm3. I used accurate amounts of Hydrogen Peroxide, measuring them to the nearest mm3. I used a wide range of temperatures, so that I had a wide range of results from which to draw more reliable conclusions. I had planned to repeat all of my readings at least once, but did not have time in the lesson to do this, which made time one of the constraints in this experiment. I only managed to do repeat measurements at 10�C, 20�C and 70�C. I did them at these temperatures, as I wanted to check that there was no increase after 30 seconds at 70�C, and because the readings at 10�C and 20�C are quite small and I wanted to make sure they were more reliable and accurate. I used a gas syringe to collect the oxygen bubbling off the Hydrogen Peroxide, as accurately as possible, as I wanted to obtain more precise results than you would by measuring the froth or by counting the bubbles coming through a water bath through a syringe from the conical flask. ANALYSING EVIDENCE AND DRAWING CONCLUSIONS From doing this investigation I have found out that as the temperature of the Hydrogen Peroxide changes, so does the rate at which the reaction takes place. This is because the Catalase enzyme in the liver is suited best to a particular temperature, at which it catalyses the Hydrogen Peroxide faster. ...read more.

Enzymes work best at 37�C. Above 60�C the enzymes begin to become denatured. The heat changes the shape of the enzyme causing the active site to become distorted, slowing down the rate of reaction, as it cannot break down the substrate molecules as quickly. The active site will eventually become so distorted that it will no longer accept any substrate molecules, and the reaction stops. Denaturing is not reversible. As the temperature decreases, enzyme activity decreases. This also causes a slowing in the rate of reaction. This idea is used in refrigeration, where food is kept below 4�C to keep enzyme activity at a minimum. Below -20�C enzymes don't function at all. However, freezing the enzymes does not destroy them, and as they thaw, they will become active again. For every increase of 10�C, you should see a doubling of enzyme action, until the optimum temperature is reached. Collision Theory: The collision theory states that particles must collide hard enough to react and that the rate of a reaction depends on how often and how hard the reacting particles collide with each other. Not all collisions will result in a reaction. Method: 160 cm3 of 10 vol. Hydrogen peroxide will be measured into each of the 38 conical flasks. These will then be placed in a water bath to bring 2 of each to each temperature, (0*C, 5�C, 10�C, 15�C, 20�C, 25�C, 30�C, 35�C, 40�C, 45�C, 50�C, 55�C, 60�C, 65�C, 70�C, 75�C, 80�C, 85�C, and 90�C). Once the desired temperature has been reached, an equilibration time of 10 minutes will be given. The celery will be cut into 38 medium sized pieces, approximately 2cm by 2cm. Each will be weighed, to make sure that they are close enough in weight for it not to affect the results drastically. Then the pieces of celery will be added to the Hydrogen Peroxide and the stop clock will be started. The volume of gas is to be collected will be noted every 15 seconds for 5 minutes. Diagram: ...read more.