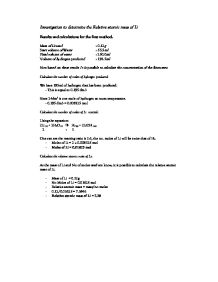 Investigation to determine the Relative atomic mass of Li

- Loss of hydrogen from gas cylinder, if incorrect placement of tube beneath cylinder The main sources of qualitative error in the second procedure were: - Misjudgement of endpoint, leading to inconsistencies in titre readings - All cumulative inaccuracies of the previous experiment in preparing the LiOH. - Incorrectly transferring the correct amount of LiOH. Errors in measurements: The main sources of quantitative error were: - Limitations in the equipment used - Misinterpretation/inaccurate readings taken Absolute error is the maximum amount by which a result may hbe out but would still give the same answer (that will round to give same answer), i.e. A balance reads to 2 decimal places which means reading of 13.22 could be a value greater that or equal to 13.215 or less than 13.225. So the absolute error for the balance is � 0.005. Relative errors are more useful as the represent the error in relation ti the original value. However it is even easier to understand the result as a 'percent relative error'. This is calculated by dividing the absolute error by the original value and then multiplying by 100. Using this it is possible to evaluate the percent relative error for the equipment used. Item Percent relative error 100cm3 measuring cylinder 0.500% Balance 4.170% 25cm3 pipette 0.012% 50cm3 burette 0.120% We can calculate the cumlative percentage relative error of all the equipment. ...read more.

However a better method would be to use a colorimeter to measure the amount of light the solution allows through. Since in this procedure the solution changes from pink to colourless a reading of distilled water could be taken and this used to check against. The main source of quantitative error came from the balance and the measuring cylinder. The glassware used was not of the very highest quality. Better results could have been achieved by using better quality equipment with smaller absolute error. While it would be impractical due to costs to have a more accurate balance there is a simple solution to give better results of gas reading that a gas cylinder. Instead we can use a gas syringe which has a much smaller absolute error. Due to their only being about 100cm3 of LiOH produced after the first procedure. It is only really possible to conduct 3 titrations (maximum of 4). This is not sufficient to ensure a good average is achieved, Any anomalies would seriously compromise the integrity of the results. If the experiment were repeated I would use more initial water and Li to produce enough LiOH for at least 5 titrations (ideally to produce 3 within .1cm3 of each other). Also if repeated I would attempt to run through he experiment 3 times, then It would be possible to calculate and average result for the relative atomic mass. This should provide a more accurate representation of the actual value. ...read more.

An excellent, well set out piece of coursework. The student has clearly and logically organised the calculations and uses formulas correctly throughout, avoiding confusion and misunderstanding by not omitting explanations and conclusions such as by explicitly identifying the corresponding volume ...

An excellent, well set out piece of coursework. The student has clearly and logically organised the calculations and uses formulas correctly throughout, avoiding confusion and misunderstanding by not omitting explanations and conclusions such as by explicitly identifying the corresponding volume of one mole of hydrogen and using it correctly in calculation.

A great deal of detail and explanation is given at every stage of calculation to ensure that the method could be repeated with little or no clarification, this is no doubt aided by the correct and balanced symbol equations. The thoroughness is highlighted by the calculation of a percentage error for each of the two methods and giving plenty of factors that could have affected this value of error, something which is sometimes neglected by students. In addition, the identification of hazards and precautions is excellent and vital when performing any experiment for the first time, another aspect which is scarcely seen in certain lesser pieces of coursework. The candidate has laid out his evaluation scientifically and concisely, avoiding unnecessary repetition.

excellent spelling, punctuation and grammar throughout and ensures fluency and clarity by keeping sentences short and clear.