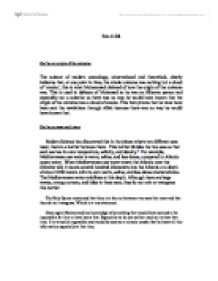 Qur'an on origin of the universe.

Qur’an on origin of the universe

Qur’an on seas and rivers

Modern Science has discovered that in the places where two different seas meet, there is a barrier between them.

The Holy Quran mentioned that there is a barrier between two seas that meet and that they do not transgress. Which is a true statement.

Once again Muhammad has knowledge of something that would have seemed to be impossible for him to have know that. Especially as he can neither read nor writeat that time. It is virtually impossible and would be seen as a miracle maybe that he knew all this information especially at that time.

The true meaning of Islam is submission and the commands of Allah. You must completely believe in Allah and only Allah aswell as obeying his commands.

Due to the fact that the linguistic meaning of Islam is submission, and adherence without objection, Islam, from this point of view, is the faith of the universe. Man in this sense, does not differ from the other creatures. Since Allah, is the Creator and the Provider, He has given man the freedom of choice, and has shown him both, the path of guidance, and the path of deviation through the Messenger that He sent to mankind throughout the ages; the last of whom is Muhammad, peace be upon them all. Therefore, he who chooses the path of guidance of his own free will, and fulfills the duties with which he is charged, and refrains from the prohibition, then he becomes the legitimate Muslim.