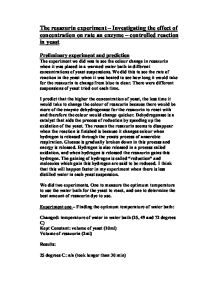 The resazurin experiment - Investigating the effect of concentration on rate an enzyme - controlled reaction in yeast Preliminary experiment and prediction The experiment we did was to see the colour change in resazurin when it was placed in a warmed water bath in different concentrations of yeast suspensions. We did this to see the rate of reaction in the yeast when it was heated to see how long it would take for the resazurin to change from blue to clear. There were different suspensions of yeast tried out each time. I predict that the higher the concentration of yeast, the less time it would take to change the colour of resazurin because there would be more of the enzyme dehydrogenase for the resazurin to react with and therefore the colour would change quicker. Dehydrogenase is a catalyst that aids the process of reduction by speeding up the oxidation of the yeast. The reason the resazurin seems to disappear when the reaction is finished is because it changes colour when hydrogen is released through the yeasts process of anaerobic respiration. ...read more.

Experiment 2- Finding the best amount of resazurin to use: Changed: volume of resazurin (1ml, 2ml & 3ml) Kept constant: Temperature of water bath (49 degrees), volume of yeast (10ml) Results: 1ml: 149 secs 2ml: 158 secs 3ml: 169 secs I found that the best amount of resazurin to use was 1ml because it doesn't take as long and there's less chance of over diluting the yeast with it. The final equipment to use: 1x boiling tube 2x measuring cylinder Yeast 1x water bath 1x pipette 1x stopwatch/timer Final controlled variables: -49 degrees C in water bath - because 72 degrees C takes too long, and so does 25 degrees C. -1ml resazurin- because it has the quickest reaction times. Final method I will measure out 10 ml of yeast suspension at different concentrations and place in boiling tube Place in water bath which is at 49 degrees C Add 1ml of resazurin using a pipette Time with stopwatch until mixture is clear. Yeast variables: Suspension of yeast in distilled water (%) ...read more.

Evaluation I think that some of my results were a little "out" due to human error and the fact that I only had my eye to judge on whether the substance had become clear or not. This could be resolved if we had an automated device that measure the amount of light let though the boiling tube. Also, other groups were using out water bath, so the average temperature of the water bath would be slightly skewed by the fact there were so many colder boiling tubes being added to it. Also, I think that the measuring equipment we used wasn't accurate enough. If we had more mechanical measuring pipettes, the ones that use vacuum to suck up liquids, then the measurements of yeast and resazurin would be a lot more accurate, and therefore lead to a more reliable experiment. If I did the experiment again I would also use a lot more variables of yeast suspension, such as ranging from 10% to 100%, going up in 10's. This would provide me with more valid data. Also if I repeated the experiment the results would be a lot more reliable. ...read more.