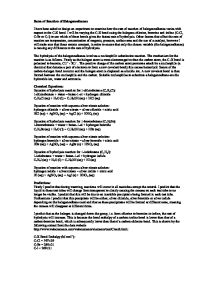 Rates of Reaction of Halogenoalkanes I have been asked to design an experiment to examine how the rate of reaction of halogenoalkanes varies with respect to the C-X bond. I will be varying the C-X bond using the halogens chlorine, bromine and iodine (C-Cl, C-Br or C-I) to see which of these bonds gives the fastest rate of hydrolysis. Other factors that affect the rate of reaction are temperature, concentration of reagents, pressure, surface area and the use of a catalyst, however I will make sure that these remain constant, in order to ensure that only the chosen variable (the halogenoalkanes) is causing any difference to the rate of hydrolysis. The hydrolysis of the halogenoalkanes involves a nucleophilic substitution reaction. The mechanism for the reaction is as follows. Firstly as the halogen atom is more electronegative than the carbon atom, the C-X bond is polarised to become, C?+ - X?- . The positive charge of the carbon atom promotes attack by a nucleophile (a chemical that donates a pair of electrons to form a new covalent bond) this causes heterolytic fission of the carbon-halogen bond to occur and the halogen atom is displaced as a halide ion. A new covalent bond is then formed between the nucleophile and the carbon. ...read more.

10) Put the bungs back in and shake each test tube twice. Shaking ensures complete mixing. Each test tube must be shaken the same number of times so that shaking does not become a variable (it must not be shaking that has any effect on the rate of hydrolysis). 11) Arrange the test tubes so that the sides with the crosses drawn on are furthest away from you. Look through each tube. The moment a cross becomes invisible, stop the stopwatch corresponding to the test tube number. Continue with this until all the crosses have become invisible, or 20 minutes has elapsed since the last silver nitrate was added. The halogenoalkanes should react well before 20 minutes, so this extra time is given to demonstrate that the control will never react, even when left for much longer than the other test tubes. A time of 20 minutes is sensible as it allows the experiment to be completed in a practical amount of time, whilst still giving adequate time to the control. 12) Record any observations of the test tube contents. Detailed and well presented observations will allow proper analysis of the results. 13) Record the time shown on each stopwatch in the relevant column of a results table. 14) Repeat the above procedure a further 2 times. To increase the reliability of the results. ...read more.