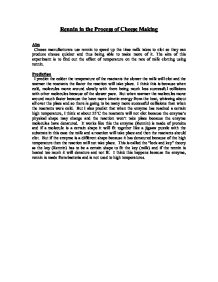 Rennin in the Process of Cheese Making.

Rennin in the Process of Cheese Making Aim Cheese manufacturers use rennin to speed up the time milk takes to clot so they can produce cheese quicker and thus being able to make more of it. The aim of this experiment is to find out the effect of temperature on the rate of milk clotting using rennin. Prediction I predict the colder the temperature of the reactants the slower the milk will clot and the warmer the reactants the faster the reaction will take place. I think this is because when cold, molecules move around slowly with there being much less successful collisions with other molecules because of the slower pace. But when warmer the molecules move around much faster because the have more kinetic energy from the heat, whizzing about all over the place and so there is going to be many more successful collisions than when the reactants were cold. But I also predict that when the enzyme has reached a certain high temperature, I think at about 55'C the reactants will not clot because the enzyme's physical shape may change and the reaction won't take place because the enzyme molecules have denatured. ...read more.

For the main experiment to find out what the relationship is between temperature and the speed of the clotting reaction we will need to use a variety of apparatus:- 1) Water bath x5 2) Test tubes 3) Syringes x2 4) Stopwatches x4 5) Thermometer x2 6) Safety glasses 7) Rennin 8) Milk This investigation should be carried out safely because we'll be wearing safety glasses to protect our eyes from any rennin or milk getting into them and the water is not hot enough to burn. To keep the experiment fair, the only variable we'll change is the temperature of the water bath, we'll not change the volume of each substance (milk 2cm and rennin 1cm) or anything else. Firstly we set up the apparatus by heating each of the 5 water baths to their temperatures, we have decided to use the temperatures 30'C, 35'C, 40'C, 45'C 50'C and 55'C,(range 30'C-55'C). Because there is a 25'C difference between the lowest and highest temperature and so there'll be quite a difference in the results. Then using the syringes, we measured 2cm of milk and squirted the milk into a test tube and using a different syringe so as to not to mix the substances we measured 1cm of rennin and squirted that into a test tube, then we put both test tubes into a water bath. ...read more.