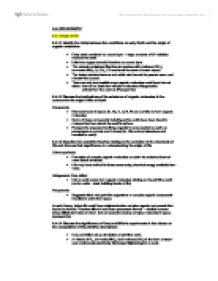 Revision notes - origins of life on Earth, chemistry of life

8.4 LIFE ON EARTH 8.4.1 Origin of life 8.4.1.1 Identify the r/ship between the conditions on early Earth and the origin of organic molecules * Early earth contained no ozone layer � large amounts of UV radiation reached the earth * Little free oxygen (anoxic) therefore no ozone layer. * The volcanic emissions filled the atmosphere with methane (CH4), ammonia (NH3), H, CO2, CO and small amounts of water vapour. * The violent electrical storms and acidic rain formed the present warm and mineral-rich oceans. * There are only two possible ways organic molecules could have formed either - formed on earth from simpler molecules (Abiogenesis) - arrived from the cosmos (Panspermia) 8.4.1.2 Discuss the implications of the existence of organic molecules in the cosmos for the origin of life on Earth Panspermia * Elements found in space (H, He, C, O, N, P) can combine to form organic molecules. * Some of these compounds including amino acids have been found in meteors that have struck the earth's surface. * Panspermia proposes that living organisms were seeded on earth as passengers on comets and meteors (ie. Life evolved elsewhere and travelled to earth) 8.4.1.3 Describe two scientific theories relating to the evolution of the chemicals of life and discuss their significance in understanding the origin of life Chemosynthesis * Formation of complex organic molecules on earth via undersea thermal vents (black smokers) ...read more.

However these fossils are photosynthetic suggesting that life started prior to that of 3.5 billion years ago. Geological Evidence * Ancient rocks contained chemical evidence that the metabolism of cyanobacteria was underway. * The first primitive cells were heterotrophic; they obtained energy by consuming organic compounds. * The evolution of photosynthesis led to the production of O2 however the O2 was not first built up in the atmosphere but in rocks. * These oxidised rocks are called ancient banded iron; these rocks can be dated with the range of levels of O2 locked inside it showing the approximate time over which plant life forms evolved. 8.4.2.3 Explain why the change from an anoxic to an oxic atmosphere was significant in the evolution of living things * As O2 levels rose, photosynthetic organisms became more abundant, while the anaerobic organisms decreased due to the presence of O2. * The formation of the ozone layer protects the Earth from UV radiation * Explosion of diverse forms of plants and animals * The evolution of photosynthesis and respiration 8.4.2.4 Discuss ways in which developments in scientific knowledge may conflict with the ideas about the origins of life developed by different cultures * Different cultures and religious in the world have their own ideas about life, it may be ...read more.

Binomial Systems 1. The first word has a capital letter which represents the genus to which the organism belongs to. Capital letter 2. The second word represents the species within the genus to which the organism belongs to. 3. Both printed in italics Examples: Petauroides volans - Genus - Petauroides // species - volans Banksia coccinea - Genus - Banksia // species - coccinea Dichotomous Keys 1. Features must be clear and accurate 2. Features must be observable 8.4.4.6 Identify and discuss the difficulties experienced in classifying extinct organisms * Reconstruction of fossils is difficult and is changed to suit new evidence. * Descriptions of features of extinct species such as colour, body covering, behaviour and habitat may be very interpretative. * It is also difficult to tell whether the fossils were of the same or different species if the species is extinct. * Impossible to study their biochemistry or cell structure 8.4.4.7 Explain how classification of organisms can assist in developing an understanding of present and past life Earth Classification helps to compare and contrast different organisms over a range of criteria; also classification systems help to represent evolutionary and morphology relationships. This system applies to present and past life forms. ...read more.

This is a very well detailed set of notes about early life and classification. It is wirrten in easy to digest bullet points and is reasonably well explained. It is very comprehensive

Overall this set of notes is 5 stars out of 5.