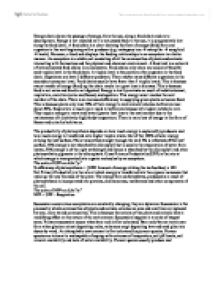 Succession and Energy in the Food Chain.

Energy chain shows the passage of energy, from the sun, along a food chain and on to decomposers. Energy is not recycled as it is not passed back to the sun; it is progressively lost along the food chain. A food chain is a chart showing the flow of energy (food) from one organism to the next beginning with a producer (e.g. mahogany tree --> caterpillar --> song bird --> hawk). However, a food web displays the feeding relationships in an ecosystem in a better manner. An ecosystem is a stable unit consisting of all the communities of plants and animals interacting with themselves and the physical and chemical environment. A food web is a network of interconnected food chains in an ecosystem. Food chains only show one source of food for each trophic level in the food chain. A trophic level is the position of an organism in the food chain. Organisms can have 2 different predators. There maybe many different organisms in the secondary consumer level. Food chains usually have fewer than 5 trophic levels. ...read more.

Gross Primary Productivity (GPP) is the rate at which energy is incorporated into organic molecules by an ecosystem. The units of GPP are kJm-2yr-1 % efficiency of photosynthesis = [GPP/ Amount of energy striking the leaf surface] x 100 Net Primary Productivity is the rate at which energy is transferred into the organic molecules that make up the new biomass of the plant. The energy from carbohydrates, produced as a result of photosynthesis is incorporated into proteins, chromosomes, membranes and other components of the cell. The units of NPP are kJm-2yr-1 NPP = GPP - Respiration Succession occurs since ecosystems are constantly changing; they are dynamic. Succession is the process by which communities of plants and animals colonise an area and overtime are replaced by new, more varied communities. This is because the actions of the plants and animals have a modifying effect on the nature of the environment. Succession happens in a series of stages/ seres. Primary succession occurs when bare rock is first colonised. Bare rock/ barren terrain can form when glaciers retreat depositing rocks, volcanoes erupt depositing lava and sand piles into dunes by wind. ...read more.

They compete with the plants already present in the habitat and replace the existing communities. As the biodiversity of plants increases, the diversity of animals that can now be supported also increases. Climax community is the different species of plants and animals that make up the final sere of an ecological succession. A climax community is stable, self-sustaining and unchanged, unless the conditions in the habitat change. A particular species usually dominates in the climax community. A dominant species is the one that exerts overriding influence on the rest of the plants and animals present in the habitat. They are usually the largest and most abundant species in the habitat. Sometimes, co-dominance is also seen. Secondary succession occurs when a land that has already sustained life is suddenly altered (e.g. due to forest fires or land clearance for agriculture). The climax community is usually reached faster than in primary succession. This is because soil is already formed. Seed banks/ spores may already be present in the soil. Animals from surrounding areas may pass by. Succession is associated with increase in biomass. As soil becomes deeper, greater amount of vegetation can be supported and hence larger number and types of animals can also be supported. ...read more.