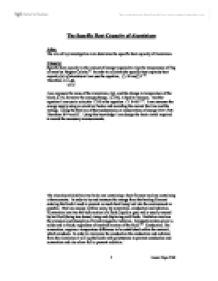 The Specific Heat Capacity of Aluminium

I can measure the mass of the aluminium, (m), and the change in temperature of the block, (   T), however the energy change,  (     H), is hard to measure.  Another equation I can use to calculate       H is the equation        E=ItV (3).  I can measure the energy supply using an electrical heater and recording the current the time and the voltage.  Using the first law of thermodynamics or conservation of energy E=H.  Therefore ItV=mcT.  Using this knowledge I can design the basic circuit required to record the necessary measurements.

The aluminium block has two holes one containing a heat filament and one containing a thermometer.  In order to try and measure the energy from the heating filament entering the block I need to prevent as much heat being lost into the environment as possible.  Heat can escape in three ways, by convection, conduction and radiation.  'Convection involves the bulk motion of a fluid (liquid or gas) and is usually caused by hot fluid (being less dense) rising and displacing cold fluids.  Radiation involves the emission and absorption of electromagnetic radiation.  Conduction takes place in solids and in fluids, regardless of any bulk motion of the fluid.'(4)  Conduction, like convection, requires a temperature difference to be established within the material, which conducts.

This is a slightly larger source of error and along with human error of measurement could result or is used to explain any inaccurate results.

The stop clock recorded to the nearest second, the largest error will occur at the lowest time, which is when the first recordings take place after 60 seconds.

This is also quite a small source of error.

However only the total time in actually used in the calculation        E = ItV. Therefore the error caused by the stop clock is even smaller.

The largest source of error involved in the investigation is due to the time taken to record the readings of the voltmeter, ammeter, thermometer and stop clock which are all supposed to be recorded simultaneously, where as in fact there could be up to a three second delay as to the actual time a reading could have been taken, as three seconds was approximately the time it took to record all four results.  Another source of inaccuracy was the assumption I made in performing the experiment that the reading of the thermometer was the temperature of the whole block.  This was not the case as the temperature of the centre of the aluminium block, which was near the heating filament, would have been greater than that of the edge of the block.  The thermometer was placed half way between the centre and edge of the block, however this does not produce a value for the average temperature of the block as the temperature does not spread out evenly.

In order to the calculate the specific hat capacity of aluminium the equation,

'ItV=mc   T'(5) must be used.  To find the specific heat capacity (c) the equation can be rearranged into the form, c= ItV

In this experiment the position of the thermometer is very important as the temperature varies throughout the block, the centre of the block being hotter than that of the edge of the block.  However there was only one possible place in which the thermometer could be placed.  An improvement to the experiment would be to vary the place which the thermometer was placed within the aluminium block and see how the results are affected.  This could not be done in school, as the equipment was not available.  Another improvement could be to use light gates instead of using stop clocks as this means that human reaction times are not involved and the results will therefore be more accurate.

To reduce the error caused by the time taken to read the stop clock thermometer, the voltmeter and the ammeter you could be ready looking at the thermometer as the required time is approaching and the read the temperature at the exact time as this is the result which changes most frequently and has the most influence on the results.  The reading on the ammeter and voltmeter remain almost constant with slight fluctuation, however an average reading of these can be taken so a slight delay in reading these values will have little effect on the results.