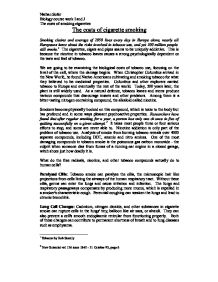 The costs of cigarette smoking

The costs of cigarette smoking Smoking claims and average of 2950 lives every day in Europe alone, nearly all Europeans know about the risks involved in tobacco use, and yet 100 million people still smoke.1 The cigarettes, cigars and pipes seams to be uniquely addictive. This is because the nicotine in tobacco leaves causes a strong psychologically dependent on the taste and feel of tobacco. We are going to be examining the biological costs of tobacco use, focusing on the level of the cell, where the damage begins. When Christopher Columbus arrived in the New World, he found Native Americans cultivating and smoking tobacco for what they believed to be medicinal properties. Columbus and other explorers carried tobacco to Europe and eventually the rest of the world. Today, 500 years later, the plant is still widely used. As a natural defence, tobacco leaves and stems produce various compounds that discourage insects and other predators. Among them is a bitter-tasting nitrogen-containing compound, the alkaloid called nicotine. Smokers become physically hooked on this compound, which is toxic to the body but has profound and in some ways pleasant psychoactive properties. Researchers have found that after regular smoking for a year, a person has only one chance in five of quitting successfully on a given attempt.2 It takes most people three or four serious efforts to stop, and some are never able to. ...read more.

When CO combines with haemoglobin, the pigment delivers less oxygen to the body's tissues, including the brain, and the person's ability to think clearly is reduced. Immune Cell Changes: Researchers studying the white blood cells called macrophages that patrol and protect the airways and lungs have found an increase in the size and numbers of lysosomes within the cells and a decrease in protein synthesis. The cells are apparently so busy ingesting foreign particles and the debris of damaged cells that they can't grow and function properly. Immune cell disruption helps explain why smokers catch colds, flu, and pneumonia more easily than non-smokers, as well as experience increased cancer rates. Immediate and Delayed Consequences: Some cellular changes from smoking produce immediate effects. After just a few days or weeks of smoking, most people have shortness of breath and decreased ability to perform aerobic exercise. Tobacco users have lowered resistance to colds and flu, and slower healing of broken bones and other wounds. Female smokers tend to have more miscarriages and babies of lower birth weight. Even in their teens and twenties, tobacco users tend to develop periodontal (gum) disease four times as often as nonusers. And many recent studies show that tobacco use interferes with complex tasks involving memory and reasoning, and addicts are more likely to have automobile or industrial accidents. Some of the more life-threatening health consequences of smoking include lung disease, heart disease, thyroid disease, and cancers of the mouth, throat, lungs, bladder, and other sites. ...read more.