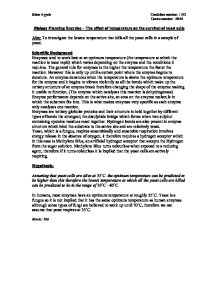 The effect of temperature on the survival of yeast cells

Biology Planning Exercise - The effect of temperature on the survival of yeast cells Aim: To investigate the lowest temperature that kills all the yeast cells in a sample of yeast. Scientific Background Enzymes tend to work best at an optimum temperature (the temperature at which the reaction is most rapid) which varies depending on the enzyme and the conditions it requires. The general rule for enzymes is the higher the temperature the faster the reaction. However this is only up until a certain point where the enzyme begins to denature. An enzyme denatures when the temperature is above the optimum temperature for the enzyme and it begins to vibrate violently so all the bonds which make up the tertiary structure of an enzyme break therefore changing the shape of the enzyme making it unable to function. (The enzyme which catalyses this reaction is dehydrogenase) Enzyme performance depends on the active site, an area on the enzyme molecule in which the substrate fits into. This is what makes enzymes very specific as each enzyme only catalyses one reaction. Enzymes are tertiary globular proteins and their structure is held together by different types of bonds the strongest; the disulphide bridge which forms when two sulphur containing cysteine residues react together. ...read more.

Beakers Large enough to be used as a water bath and hold boiling tubes Light Microscope Different powers to show accurately if the yeast cells are alive or dead Glass Rod An easy way to obtain a sample of yeast cells to place on the spotting slide Spotting Slide Used to place yeast sample on in order to examine it under the light microscope Method: A 10cm3 sample of yeast was taken and put into a boiling tube. Equal volume of sugar solution (sucrose) was added as yeast uses this as a fermentation substrate. This was then left to ferment whilst a water bath was set up for temperatures in the range 40�- 60�C. The boiling tube was then added to the water bath and left for 5 minutes in order for the yeast to become accustomed to its new environment. 0.2cm3 of Methylene Blue was added to a test tube and also placed in the water bath with the boiling tube for 5mintutes. After 5 minutes, the Methylene blue was added to the yeast and the colour change was observed. ...read more.

Also the equipment being used was made of glass therefore it was important to take necessary safety precautions. Modifications The following changes were made to the method after the preliminary results: * Instead of 10cm3 of yeast and sucrose being used, these amounts could be halved and instead 5cm3 of both solutions could be used. * Rather than 0.2cm3 Methylene blue being used, 0.1cm3 of Methylene should be used as it is assumed that with a stronger concentration it will take longer to see a colour change. The range of temperatures used should begin from 40�C-60�C However once 50�C is reached, then more accurate temperatures such as 54�C and 58�C should be used in order to determine the lowest temperature that yeast cells are killed at more accurately. Temperature (�C) Colour change observation Number of dead cells Number of living cells Percentage of Living cells (%) The results table for the actual experiment would look like this: Using the results a graph can be plotted: This graph could be used to estimate the temperature at which all yeast cells are dead. The following graph shows a predicted curve and shows how this could be obtained. ...read more.

This is a well written introduction to a report.
1. The background knowledge section is well written but the sources need to be referenced.
2. The hypothesis is sound.
3. The results are well presented.
4. The report needs to be finished by including the main set of results, a conclusion and an evaluation.
***