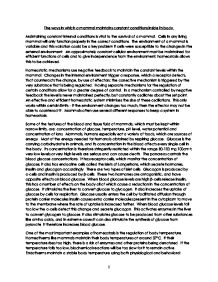 The ways in which a mammal maintains constant conditions inside its body.

The ways in which a mammal maintains constant conditions inside its body. Maintaining constant internal conditions is vital to the survival of a mammal. Cells in any living mammal will only function properly in the correct conditions. The environment of a mammal is variable and this variation could be a key problem if cells were susceptible to the changes in the external environment. An approximately constant cellular environment must be maintained for efficient functions of cells and to give independence from the environment; homeostasis allows this to be achieved. Homeostatic mechanisms use negative feedback to maintain the constant levels within the mammal. Changes in the internal environment trigger a response, which a receptor detects, that counteracts the change, by use of effectors; the corrective mechanism is triggered by the very substance that is being regulated. Having separate mechanisms for the regulation of certain conditions allow for a greater degree of control. In a mechanism controlled by negative feedback the level is never maintained perfectly, but constantly oscillates about the set point. An effective and efficient homeostatic system minimises the size of these oscillations. This only works within certain limits - if the environment changes too much, then the effector may not be able to counteract it. Mammals often use several different responses to keep a system in homeostasis. ...read more.

The thermoregulatory centre sends impulses to several different effectors to adjust body temperature. Temperature control is achieved by negative feedback. The thermoregulatory centre is part of the autonomic nervous system, so the various responses are all involuntary. When a mammal is cold there are four main physiological responses. Firstly shivering; muscles contract and relax repeatedly, generating heat by friction and from metabolic reactions. Vasoconstriction; the arterioles leading to capillaries on the surface layers of the skin constrict to reduce blood flow through the capillaries, this means less heat is carried from the core to the surface of the body, maintaining core temperature. It also means the amount of heat lost through the skin by radiation and conduction is reduced. Hair rising; muscles contract, raising skin hairs and trapping an insulating layer of still, warm air next to the skin. Increased metabolic rate; glands secrete adrenaline and thyroxine respectively, which increase the metabolic rate in different tissues, especially the liver, so generating heat. When a mammal is cold there are two main physiological responses. Firstly vasodilation; arterioles leading to the capillaries dilate, also the shunt vessels are closed off. This results in increased blood flowing closer to the surface of the skin and so more heat is lost to the environment by radiation and conduction. ...read more.

This then passes to the kidney which is excreted as urine. The liver is also responsible for the regulation of lipids. The lipids are removed from the blood by either the break down of them or modification and transportation to fat depots. Bile compounds, minerals and cholesterol are also regulated. Another form of excretion arises in the lungs. This organ excretes waste carbon dioxide as well as water. Carbon dioxide is a waste product of respiration and is released from the lungs during expiration along with water vapour. The lungs are specialized organs which contain millions of microscopic air sacs called alveoli. The large numbers of alveoli means a large surface area to volume ratio for gas exchange. The alveoli consist of a single celled epithelium so the thickness of the membrane is reduced and the diffusion pathway is small. A steep concentration gradient between the alveoli and the capillary surrounding it is maintained. This all enables Fick's law to be at its optimum so diffusion is at its maximum. Maintaining constant internal conditions is vital to the survival of any organism especially a mammal. Mammals have evolved through time to consist of many mechanisms that can counteract any change that arises. This has allowed mammals to become more complex and able to survive regardless of their external environment unlike other members of the animal kingdom. ?? ?? ?? ?? 1 ...read more.