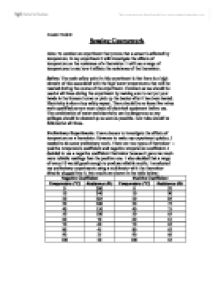 Safety: The main safety point in this experiment is that there is a high element of risk associated with the high water temperatures that will be reached during the course of the experiment. Common sense should be used at all times during the experiment by making sure to not put your hands in the Bunsen burner or pick up the beaker after it has been heated.

Electricity is also a key safety aspect. There should be no loose live wires and a qualified person must check all electrical equipment before use.

The combination of water and electricity can be dangerous so any spillages should be cleaned up as soon as possible. Lab rules should be followed at all times.

The results for the negative coefficient were taken to the nearest 5 ohms because accuracy was not important.

Sensor: Sensors are systems that measure or respond to changes in their surroundings. In this case the thermistor responds to changes in temperature by increasing/decreasing resistance.

A sensor is a device designed to produce an electrical signal in response to a change in its surroundings, either caused by a change in a specific physical variable or by the movement of surrounding objects.

Sensitivity: The ratio of output for a given input.

The sensitivity of a measuring instrument is the change of its output divided by the change in input.

A temperature sensor whose output changes by 100 mV for a change of 2 K in its input has a sensitivity of 50 mV per Kelvin.

In a system or an instrument in which the change of reading is not proportional to the change of the variable causing the reading, the graph would be a curve.

Poor connections in my circuit could have increased resistance so any of my results could have been anomalies.

Resolution: From my plotted graph of Average Resistance against Temperature, I obtained my resolution results by drawing lines from my error bars across to the line of best fit and then down to the x-axis. I then measured the distance between the vertical lines. My results are shown below:

When the temperature is low, the average resistance is very high and has large error bars. The results were very far apart and so producing an element of inaccuracy to my experiment.

From my results for resolution, I can conclude that my results show that as temperature increases, so does resolution.