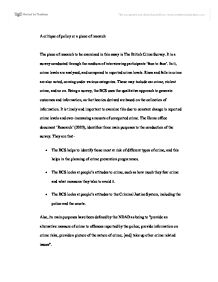 A critique of policy or a piece of research - The British Crime Survey.

A critique of policy or a piece of research The piece of research to be examined in this essay is The British Crime Survey. It is a survey conducted through the medium of interviewing participants 'face to face'. In it, crime levels are analysed, and compared to reported crime levels. Rises and falls in crime are also noted, coming under various categories. These may include car crime, violent crime, and so on. Being a survey, the BCS uses the qualitative approach to generate outcomes and information, as the theories derived are based on the collection of information. It is timely and important to examine this due to constant change in reported crime levels and ever-increasing amounts of unreported crime. The Home office document 'Research' (2003), identifies three main purposes to the conduction of the survey. They are that- * The BCS helps to identify those most at risk of different types of crime, and this helps in the planning of crime prevention programmes. * The BCS looks at people's attitudes to crime, such as how much they fear crime and what measures they take to avoid it. * The BCS looks at people's attitudes to the Criminal Justice System, including the police and the courts. Also, its main purposes have been defined by the NDAD as being to "provide an alternative measure of crime to offences reported by the police; provide information on crime risks; provide a picture of the nature of crime; [and] take up other crime related issues". By offering a critique of the BCS, this essay will suggest improvements to any future BCS proposed, and offer a complete diagnostic of the survey method. The primary purpose of the British Crime Survey is to estimate how many of the public in England and Wales are victims of selected types of crime over a year, describing the circumstances under which people become victims, and the consequences of crime for victims. ...read more.

There may be a propensity to refuse, likely to be related to the experience of any earlier interview, and 'this in turn is closely related to the respondent's victimisation experience(s)' (Lynn and Eliot, 2000). Interviews last longer with victims of crime than with non-victims, and are considerably longer still for multiple victims (Hales and Stratford, 1999). Another possible negative aspect of this design is that it introduces the possibility of 'conditioning effects'. In other words, the experience of being interviewed previously on the BCS could affect a sample member's responses on a subsequent occasion. This would have to be carefully evaluated. In addition, there is a risk of the sample becoming 'out-of-date.' (Lynn, Eliot, 2000). In other words, at the second survey period, the sample will be biased against recent immigrants and those under sixteen (who are too young to take part in the survey.) If a section of the population has a tendency to select different answers which differ dramatically from those of others, there may be an effect on the variance of estimates. In some circumstances, the probabilities can be controlled in a way which reduces standard errors, but usually 'variation in selection probabilities has the effect of increasing standard errors.' (Haworth, 2000) The British Crime Survey is a survey conducted in the form of an interview. This poses difficulties for the interviewer, as interviewers can be a source of variance due to more or less subtle differences between them in the ways they read questions, the tone of their voice, and many other factors. However, in interview format, there is guarantee that results will follow, as there is no opportunity for non-correspondence. � The data analysis process can be complex, with 'some methods still developing' (Graves 1998). The 'methodology relying on standardization' can force the researcher to develop questions general enough to be minimally appropriate for all respondents, possibly missing what is most appropriate to many respondents. ...read more.

Therefore, there are no figures on crimes against children, and serious crimes against children, such as child abuse. There are difficulties in obtaining this information though. If the figures were received by current participants referring to crime committed against them in the past, the information would be out-of-date, as participants (sixteen and over) are referring to child abuse suffered perhaps, in some cases, years ago. As mentioned in the discussion of ethics, it may be unsuitable for a child under sixteen to participate. It should be noted that obtaining this information from a minor may prove unethical. However, it is worth considering the benefits of having up-to-date information on crimes against children, and perhaps a separate, more suitable, method of obtaining this information can be found. What is interesting about the BCS, in comparison with earlier copies, is that the questioning has been over a period of the calendar year, as opposed to the first quarter of every year. This suggestion, put forward by Lynn and Eliot, is advantageous. Due to the increase in sample size (from twenty thousand to forty thousand), there was a need to allow more time for participants to answer questions correctly. As opposed to merely doubling the time given (from three months to six months), it was decided that giving the calendar year would benefit both participant and interviewer alike. This Critique was written in order to address the issues surrounding the British crime survey. The main points in this essay were- * The disadvantages and advantages of survey-based interviewing * The ethics of interview-based surveying * Possible improvements of future editions of the BCS. By the discussion of these main points, the implications of the BCS are revealed. It has been identified that there are a number of different mediums available in which to conduct a survey. It is the opinion of this essay that the most effective medium available is being used for this line of research, and that the improvements suggested in earlier critiques has contributed greatly to the success of the British Crime Survey. ...read more.