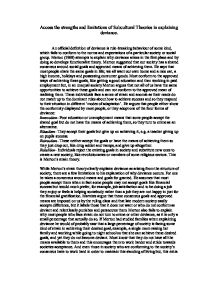 Access the strengths and limitations of Subcultural Theories in explaining deviance.

Access the strengths and limitations of Subcultural Theories in explaining deviance. An official definition of deviance is rule-breaking behaviour of some kind, which fails to conform to the norms and expectations of a particular society or social group. Merton (1968) attempts to explain why deviance arises in the first place and by doing so develops functionalist theory. Merton suggested that our society has a shared consensus around social goals and approved means of achieving them. He says that most people share the same goals in life; we all want our own home and a nice car, a high income, holidays and possessing consumer goods. Most conform to the approved ways of achieving these goals, like getting a good education and then working in paid employment but, in an unequal society Merton argues that not all of us have the same opportunities to achieve these goals and can not conform to the approved mean of realizing them. These individuals face a sense of strain and anomie as their needs do not match up to the dominant rules about how to achieve success and so they respond to their situation in different 'modes of adaptation'. ...read more.

A weak spot in Cohen's theory is that he assumes that these mainstream goals are deemed to be desirable and greatly accepted by working-class youths and that there delinquent behavior is a response to the goals they can not achieve. Miller (1962) argues against this and suggests that the working-class have always had their own independent culture, and so they are neither rejecting mainstream values nor wanting revenge against society's goals, as they have never lived by or held them. Matza's (1964) study on delinquency found that most young people were not committed to delinquent values and instead accepted society's aims but drifted in and out of delinquency rather than showing commitment to the norms and values. Cohen's theory does though explain working-class delinquency as a group response and not just as individual's behavior, as with Merton's theory. Paul Willis (1979) argued that the creation of deviant sub-cultures amongst working class boys was not simply a response to such things as status denial. Such sub-cultures also represented an organised, realistic, attempt to come to terms with a wider cultural world that had already, by the time they had entered secondary school, earmarked the boys in Willis's study as "failures". ...read more.

collective values- Societies values can only be help firmly in place if people are reminded of the boundaries between right and wrong. A person going against these values and the consequences of their actions have the effect of reinforcing social control. Such events give the opportunity to condemn deviant behavior and, by punishing criminals, reassert the boundaries of acceptable behavior, and strengthen collective values. By enabling social change- without deviant behavior new ideas on how to deal with the delinquents would not develop, enabling society to progress and change. By acting as a 'safety valve'- Deviance can be a way of expressing anger and frustration at society, avoided wider and more serious challenges to social order. By acting as a warning device- Deviance can act as a warning as to more serious underlying problems in society. For example, drug addiction, high rates of suicide and truancy from school. Subcultural theories help to understand that most deviant acts are carried out as some kind of reaction to society's consensus goals and values, whether this is denial, frustration or revenge from unable to achieve success in the eyes of society. But these theories generally talk about male youths and fail to mention why women commit crime and the subcultures they create as wife, mother, and nurturer. ...read more.