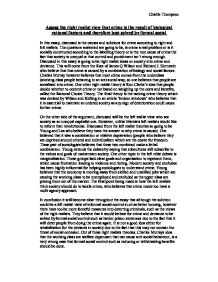 Assess the right realist view that crime is the result of biological rational factors and therefore best solved by formal social control.

Assess the right realist view that crime is the result of biological rational factors and therefore best solved by formal social In this essay, discussed is the causes and solutions for crime according to right and left realists. The questions answered are going to be, is crime a real problem or is it socially constructed according to the labelling theory or is the root cause of crime the fact that society is unequal or that control and punishment isn't strong enough. Discussed in this essay is going to be right realist ideas on society into crime and deviance. This will come from the likes of James Q Wilson and Richard J. Hernstein who believe that that crime is caused by a combination of biology and social factors. Charles Murray however believes that most crime comes from the underclass (working class people behaving in an anti social way, so one believes that people are socialised into crime. One other right realist theory is Ron Clarke's idea that people decide whether to commit crime or not based on weighing up the costs and benefits, called the Rational Choice Theory. The final theory is the tacking crime theory which was devised by Wilson and Kelling in an article 'broken windows' who believes that it is essential to maintain an ordered society as any sign of deterioration could cause further crime. On the other side of the argument, discussed will be the left realist view who see society as an unequal capitalist one. However, unlike Marxists left realists would like to reform than revolutionise. Discussed from the left realist theories so going to be Young and Lea who believe they have the answer to why crime is caused. One believed that it was a combination or relative depravation (people who believe they are deprived around others) and individualism which are the desire for freedom. These pair of sociologists believes that these two combined make a lethal combination. ...read more.

They say that any sign of deterioration, such as graffiti or vandalism must be dealt with immediately. The pair advocates a 'zero tolerance' policy towards undesirable behaviour such as prostitution, begging and drunkenness. The role of the police should be to focus on controlling the streets so that law-abiding citizens feel safe. Crime prevention policies should reduce the rewards and increase the costs of crime to the offender, for example by 'target hardening' (making public places more difficult to break into), greater use of prison and ensuring punishments follow soon after the offence to maximise their deterrent effect. There are some criticisms of Wilson and Kelling's idea of advocating a zero tolerance policy due to the fact that it gives police a free rein to discriminate against ethnic minority youth, the homeless and people underprivileged. It also results in displacement of crime to other areas. One theorists Jones notes that right realist policies in the USA failed to prevent the crime rate rising. It also overemphasises control of disorder, rather than tackling underlying causes of neighbourhood decline such as a lack of investment. Having such a formal control such as longer prison sentences and zero tolerance can have a negative impact on people having respect to society. Lower class may riot as they have not got the freedom to live with the police and CCTV watching them move. However, unlike other right realist ideas that are preoccupied with petty street crime and ignores corporate crime, which may be more costly and harmful to the public. The broken windows idea is where it is the petty street crimes that lead on to the deterioration of society which leads onto larger crimes such as prostitution and drug dealing. Left realists unlike right realists believe we need to develop explanations of crime that will lead to practical strategies for reducing crime. Lea and Young identify two related causes of crime: relative depravation and individualism. ...read more.

Young and Lea described crime being committed due to a combination of both relative depravation and individualism. The pair believes that these two combined make a lethal combination for discontent which leads to crime amongst other things. Young also described subcultures and say that they are aiming for the goals of mainstream society, however they can't achieve it legitimately, but have to immerse into the 'American Dream' illegitimately. Marginalisation is also a big contributing factor with the lower class that lack clear goals and organisations which leads to resentment and frustration leading onto violence and rioting. Young also believes that we are living in a late modern stage we are moving away from unskilled labour (working class jobs) so that they are turning unemployed. This means that they are getting excluded from society from the middle and upper class. Finally, to prevent crime, the left realist believe that police do not have a very big impact on society but it needs all the agencies to work together in order for crime to decline and a more informal social control. In answer to the essay question it has been argued that left wing realists perspectives on how to solve crime are useful, however in modern society it is very hard to get rid of relative depravation which they believe is on of the main cause. In Britain, the minimum wage and housing has never been better and to tackle crime, one idea from the left realists is to give them better housing condition and better jobs. However, with the housing getting better and the increase in pay, the lower class are able to live much better lives than what the left realists say. The right realist's perspectives are better at providing answers to why and how people commit crime due to the fact that harsher prison sentences and zero tolerance policies would deter criminals who have either committed a crime, or about to commit one. Ron Clarke's rational choice theory in particular has demonstrated why people would commit a crime by weighing out the costs and benefits. ?? ?? ?? ?? Charlie Thompson ...read more.