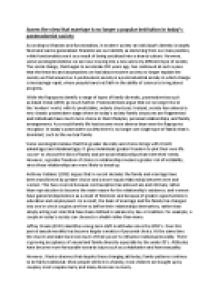 ﻿Assess the view that marriage is no longer a popular institution in today?s postmodernist society According to Marxists and functionalists, in modern society an individual?s identity is largely fixed and can be generalised. Marxists see our identity as stemming from our class position, while functionalists see it as a result of being socialised into a shared culture. However, some sociologists believe we are now moving into a new and very different type of society. The social change, that began to accelerate 300 years ago, has continued at such a pace that the theories and assumptions we had about modern society no longer explain the society we find around us. A postmodern society is a post-industrial society in which change is increasingly rapid, where people have lost faith in the ability of science to bring about progress. While the Rapoports identify a range of types of family diversity, postmodernists such as David Cheal (1993) go much further. Postmodernists argue that we no longer live in the ?modern? world, with its predictable, orderly structures. Instead, society has entered a new chaotic postmodern stage where in today?s society family structures are fragmented and individuals have much more choice in their lifestyles, personal relationships, and family arrangements. As a result family life has become more diverse than even the Rapoports recognise. ...read more.

On the other hand, many couples see cohabitation as a permanent alternative to marriage. This proves that there is less of a traditional social stigma attached to living with someone out of wedlock. Child bearing outside of marriage has also become more common with only a third of people aged 18-24 who think marriage should come before parenthood. Divorce is another major cause of changing family patterns and greater family diversity. For example, most re-marriages involve a divorcee, and divorce creates both lone-parent families and one-parent households. Since the 1960?s there has been an increase in the amount of divorces in the UK, doubling between 1961 and 1999 and doubled again by 1972. The upward trend continued peaking in 1993 at 180,000. Numbers fell slightly since then with 157,000 divorces in 2001- about six times higher than in 1961. This rate means that about 40% of all marriages will end in divorce. The increase in divorce is due to; changes in laws, declining stigma and changing attitudes, secularisation, rising expectations of marriage and the changes in the position of women. Divorce was very difficult to obtain in the 19th century, especially for women. Gradually changes in the law have made divorce easier. When the grounds for divorce were equalised for men and women in 1923, this was followed by a sharp rise in the number of divorce petitions from women. ...read more.

In conclusion I think there are still many people who favour marriage. Although slowly, but surely old beliefs are changing. This phenomenon is triggered by social evolution, no one can stop it. The amount of people who value marriage has decreased due to the changes in society, however, in some cultures such as East Asian, the importance of marriage has remained a necessity for a successful life. However, if people choose different alternatives to marriage and are satisfied with their personal relationships, a legal document shouldn?t make it any less valued or valid. I also agree with the feminist perspective that it?s a positive sign that women are breaking away from the patriarchal family image in which households and relationships are led by men. By breaking away from their control, women are progressing even further with the ideology that both genders should be equal. In the long run I think that marriage will always have valued aspects, but people will continue to have higher expectations and will refuse to subject themselves to anything less than what they think is the perfect union, especially as it?s so much easier to change a relationship status? nowadays as there is far less stigma attached to deciding to cohabit or getting a divorce from an unhappy marriage. ...read more.