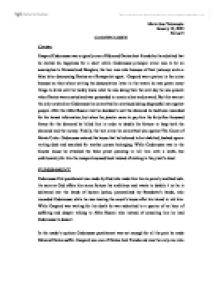 Caderousse principal crime was to be an accomplice to Fernand and Danglars.

CADEROUSEE Crime: Gaspard Caderousse was originally one of Edmond Dantes best friends but he admitted that he envied his happiness for a short while. Caderousse principal crime was to be an accomplice to Fernand and Danglars, the two men who because of their jealousy wrote a false letter denouncing Dantes as a Bonapartist agent. Gaspard was a partner in the crime because as they where writing the denunciation letter in the tavern he was given many things to drink until he hardly knew what he was doing then the next day he was present when Dantes was arrested and was persuaded to remain silent and coward. But this was not the only coward act Caderousse he committed he continued doing disgraceful acts against people. After the Abbe Busoni visit he decided to sell the diamond he had been rewarded for his honest information, but when the jeweler came to pay him the forty-five thousand francs for the diamond he killed him in order to double his fortune to keep both the diamond and the money. Finally, the last crime he committed was against The Count of Monte Cristo. Caderousse entered the house that he believed to be inhabited, beaked open a writing desk and searched for another person belonging. While Caderousse was in the Counts house he attacked the false priest planning to kill him with a knife, but unfortunately for him the weapon bounced back instead of sinking in the priest's chest. ...read more.

It is true that although she committed an error not a crime her punishment was very harsh because it changed her life completely. Her change was so drastic that that her life almost reached destruction. DANGLARS Crime: Baron Danglars committed his crime primarily because he was jealous of the positions Edmond Dantes had acquired while he worked at the Morrell and sons firm. Dantes manifested his jealousy as he denounced Dantes as a Bonapartist agent, writing a letter denouncing him of his false position and mailing it to the government. Danglars was very guilty in Dantes prosecution because was he who acted as the instigator and actually wrote the letter. His final crime was converting himself into a Baron and turning into millionaire working as a banker. Punishment: Danglars punishment was very painful because it was slow and silent. His sentence came to him many years after Dantes arrest to prison. Baron Danglars started to loose his fortune gradually; his first lost was when The Count of Monte Cristo passed a false report by a telegraph station which obliged him sell all his Spanish bonds. Obeying his wife advice he sold his bonds and lost more than one million francs. Another punishment which affected his honor more than his own finances was that his daughter Eugene escaped with a girlfriend, evading the marriage she was arranged with Andrea Calvatti her brother and murderer. ...read more.

Guided by Monte Cristo's teachings, she poisoned all of Villefort family committed suicide and caused inside him a feeling of pain and sorrow so immense that led him to madness. "He had assumed the role of an implacable judge with his wife: he had sentenced her to death. Stricken with terror crushed by remorse, overwhelmed by the shame into which he had plunged her with the eloquence of his irreproachable virtue, she was perhaps at that very moment preparing to die" (400). His finall punishment was unexpected and took place at the Palace de Justice where Bennedetto's case was taking place. As Monsieur Villefort was fulfilling his role as public prosecutor he was denounced of being Benedettos father. After hearing the news he entered in a state of stupefaction and felt uncomfortable. In the reader's opinion Villefort's punishment was very harsh compared with the crime he committed against Dantes. It is true that Villefort could of have saved Edmond from prison, but it is also true that his punishment was very exaggerated. One can deduce that his sentence was cruel because not only did it destroy his life but the life of the rest of his family. His punishment was so inconsiderate, that he turned crazy after his family was murdered. In one's opinion the court of Monte Cristo over exaggerated his actions by killing a hole family, he even killed a poor innocent life, like Edwards life was. Maria Jose Valenzuela January 13, 2003 Period 3 ...read more.