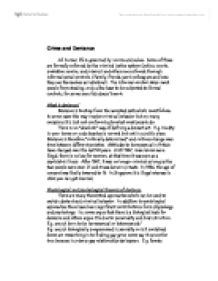 Crime and Deviance All human life is governed by norms and values. Some of these are formally enforced by the criminal justice system (police, courts, probation service, and prisons) and others are enforced through informal social controls. (Family, friends, work colleagues and how they see themselves as individual). The informal control stops most people from stealing; only a few have to be subjected to formal controls, for some even this doesn't work. What is deviance? Deviance is to stray from the accepted path which most follow. In some cases this may involve criminal behavior but on many occasions it is just not conforming to what most people do. There is no "absolute" way of defining a deviant act. E.g. Nudity in your home or n**e beaches is normal but not in a public place. Deviance is therefore "culturally determined" and cultures change over time between different societies. Attitudes to h********l in Britain have changed over the last 50 years. Until 1967, male h**o were illegal, there is no law for women, at that time it was seen as a psychiatric illness. After 1967, it was no longer criminal as long as the two people were over 21 and it was done in private. In 1994, the age of consent was finally lowered to 16. In Singapore it is illegal whereas in USA you can get married. Physiological and psychological theories of deviance There are many theoretical approaches which can be used to explain deviant and criminal behavior. In addition to sociological approaches there have been significant contributions from physiology and psychology. I.e. ...read more.

Things only become deviant or criminal when society decided to label it to be. E.g. sexuality - what is appropriate depends on the culture and the circumstances. E.g.2 Football kissing - can cause mayhem, sometimes when one player has been labeled it may have consequences for their life, Becker concentrated his work on:- a) How people become labeled and how this affects people's lives. b) Why certain types of behaviour are defined as deviant. The possible effects of labeling: All labels define people as particular types of individuals. Hey are evaluative comments. All labels are negative or positive, such as label someone depending on their appearance. 1) Becker argues that some labels are master statuses which colour our perception for all the other statuses, it is always the negative status with the biggest impact. For example, husband, doctor, voluntary worker and paedophiles 2) People always respond to others according to negative characteristics of the label. 3) The individual who has been labeled by others may find that it is very difficult to move away from the label and it may affect their self concepts, self esteem as you may start to see yourself becoming that label. 4) Negative labels may lead to social rejection. E.g. they may find family, friends treat them differently. 5) People who have a criminal record may find it hard to get a job. 6) People who are rejected by the society may form a subculture of their own where they have a degree of acceptance by others. E.g. Naturists join naturists clubs. 7) Once a person starts to involve in that subculture, it usually becomes a controlling factor in their everyday life, so they will become the label. ...read more.

in some people's criminal behavior but argues that individuals often choose to commit crimes even when they know what they are doing is wrong. His explanation is a distinct approach. He believes that most people stick to norms and values of society for most of the time. However on certain occasions they are able to neutralize their bonds with society and convince themselves that on this occasion, law doesn't apply to them. He used a number of techniques to this:- 1) Denial of responsibility - the person places responsibility on someone else. E.g. joy riders may blame others in the car (they made me do it) 2) Denial of injury - Someone justifies it because no one suffers from it. (Drug users only affects me) 3) Denial that act is wrong )Racists say they shouldn't be here in the first place) 4) Condemnation of those who enforce the law:- People argue that police actually greeted the situation themselves. (Football hooligans) Matsa's approach throws doubt on traditional sub cultural explanations of crime - most people have the same values but some choose to do off the rails every now and then. Matza offers a good explanation of why some people drift into deviant behavior. He argues that everyone needs to feel excitement, to be able to express their feelings, emotions and most have an aggressive side to them. People however chose different ways of expressing their substrarian values. Most of us chose legitimate ways. Most of the population would find legal ways of satisfying these needs. However, some do it illegally E.g. drugs, crime, violence. He reason why so many teenagers are deviant is because they may still wan to try different things out. ...read more.