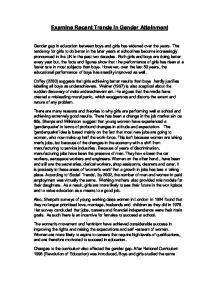 Examine Recent Trends in Gender Attainment Gender gap in education between boys and girls has widened over the years. The tendency for girls to do better in the later years at school has become increasingly pronounced in the UK in the past two decades. Both girls and boys are doing better every year but, the facts and figures show that the performance of girls has risen at a faster rate in most subjects than boys. However, over the last 50 years, the educational performance of boys has steadily improved as well. Coffey (2200) suggests that girls achieving better results than boys hardly justifies labelling all boys as underachievers. Weiner (1997) is also sceptical about the sudden discovery of male underachievement. He argues that the media have created a misleading moral panic, which exaggerates and distorts the extent and nature of any problem. There are many reasons and theories to why girls are performing well at school and achieving extremely good results. There has been a change in the job market since 60s. Sharpe and Wilkinson suggest that young women have experienced a 'genderquake' in terms of profound changes in attitude and expectation. The 'genderquake' idea is based mainly on the fact that most new jobs are going to women, who now make up half the work-force. ...read more.

This leads to boys seeing the environments in which the 'hard' sciences are taught as male spaces, which they dominate. Colley (1998) found that gender stereotyping still remains significant in further and higher education because of cultural beliefs about femininity and masculinity, family pressure and peer pressure. She notes that in single s*x schools girls are twice as likely to study mathematics at university. Also most girls are well behaved than boys. They read more than boys and can concentrate longer than boys. Girls at GCSE age are more mature and more able to see the longer-term consequences of hard work than boys, who respond better to having short-term goals. There are also many reasons to why boys are under achieving. Mitsos and Browne (1998) believe that boys are under-achieving in education, although they also believe girls are disadvantaged. The evidence of boys' under-achievement, according to Mitsos and Browne, is that, girls do better than boys in every stage of National Curriculum SAT (Standard Assessment Tests) results in English, maths and science, and they are now more successful than boys at every level in CCSE, outperforming boys in every major subject except physics. Atkinson and Wilson's (2003) research shows that the gap between boys' and girls' achievement at school grows between 7 and 16. ...read more.

She cites two reasons for girls overtaking boys in achievement,the greater ambition of girls compared to twenty years earlier and the culture of 'laddish masculinity' which turns against the idea of working hard for exams. She argues that perhaps boys are becoming increasingly laddish in their efforts to construct themselves as non-feminine, as girls move into areas traditionally seen as masculine. However, not all boys are doing poorly in their education as Epstein et al (1999) suggests. The statistics may mask the fact that it is some boys (as well as some girls) who fail, especially at secondary level. Also, Gilborn & Mirza (2000) believes that ethnicity and class are more significant than gender. Maybe teaching boys and girls in single s*x schools would help a lot as Colley suggests but also at the same time, this would cause competition between the two genders and the gender gap will remain. Croxford & Tinklin (2000) suggests that having a boy/girl seating plan in lessons reduces male disruptions as they are motivated by seeing the amount of work girls do in the lesson. Ofsted inspections also help as the schools that have teachers who cannot teach at good standards will be replaced by someone who can. There are lots of discussions and solutions that can help boys achieve results as good as girls. ...read more.