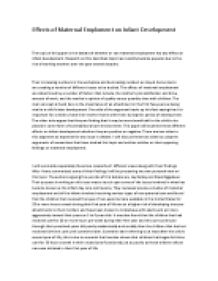 Examine the Effects of Maternal Employment on Infant Development.

﻿Effects of Maternal Emploment on Infant Development The topic of this paper is the debate of whether or not maternal employment has any effect on infant development. Research on this described topic has recently become popular due to the rise of working mothers over the past several decades. Their increasing numbers in the workplace and decreasing numbers as stay at home moms are creating a number of different issues to be studied. The effects of maternal employment are determined by a number of factors that include, the mother's job satisfaction and drive, amount of work, and the mother's opinion of quality versus quantity time with children. The main concept at hand here is the importance of an attachment in the first few years as being vital to a child's later development. One side of the argument backs up this fact saying that it is important for a child to have their mother home with them during this period of development. The other side argues that they are finding that it may be more beneficial for the child to be placed in some form of nontraditional care environment. This paper will examine these different effects on infant development whether they are positive or negative. ...read more.

In comparison to this, children whose mothers did not work during their first three years of life markedly more compliant than their peers whose mothers were employed full-time. The opposing side to this debate, written by K. Alison Clarke-Stewart, also brings up a good argument. It is obvious in our changing society that mothers bringing home their families' only income or second income has become more common so that every year the number of their children being placed in different kinds of 'nontraditional' child care atmospheres is constantly increasing. In doing her research she is looking for the marked advantages and disadvantages that these various child care environments for the involved children's social and cognitive development. She seems to have only found advantages after coming to the conclusion, and her article's title, that, a home is not a school. The research used studies involving 150 children that were 2 and 3 years old. These children belonged to one of six different child care situations, these being, care by parents, care by a sitter at home, day care, part-time nursery school, full time nursery or care in a center full-time and part-time by a sitter. It was found in these studies that children that were placed in the different day care centers and preschool programs are more likely to be socially skilled and intellectually advanced than children that stayed at home with their parents or sitters. ...read more.

In the articles, each side discusses how these children do academically; one side placing its emphasis on better adjustment to school and the other on more advanced skills when in school. It has been discussed that children that were not placed in non-traditional care and stayed at home with their mothers for their first three years do not take long to catch up academically with the kids that had been placed in different care environments. Children that have been able to stay at home with their mothers have also been found to be more compliance and less behavioral problems when placed into school. I think that the one-on-one relationship that they got to have with their mother right from the beginning help a great deal in creating these types of good behaviors. The children who have been placed in the care of others all their lives would not know this feeling because they have always been surrounded by other children receiving care from the same few center workers. I really feel that the best thing a mother can do for her children to ensure good development and a happy childhood is be a loving mother at home for at least the first three years of life. Once they have had this experience, and they are closer to 4 years old they will probably be ready for some kind of pre-school program. ...read more.