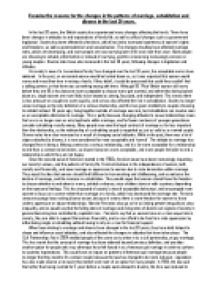 Examine the reasons for the changes in the patterns of marriage, cohabitation and divorce in the last 30 years.

﻿Examine the reasons for the changes in the patterns of marriage, cohabitation and divorce in the last 30 years. In the last 30 years, the British society has experienced many changes affecting the family. There have been changes in attitudes to and expectations of family life, as well as official changes such as government legislation. Society has been affected by feminism, which has led to increased awareness of women?s rights and freedoms, as well as postmodernism and secularisation. The changes resulting have affected marriage rates, which are decreasing, and more people are now marrying later in life and more than once. More people are choosing to cohabit, either before or instead of marrying, and this is becoming increasingly common in young couples. Divorce rates have also increased in the last 30 years, following changes in legislation and attitudes. As society?s view of a ?conventional family? has changed over the last 30 years, the acceptable norms have widened. In the past, an unmarried woman would be looked down on, as it was expected that women would marry and invest their time in raising a family. If they didn?t, it could be presumed that could they couldn?t find a willing partner, or that there was something wrong with them. ...read more.

When laws relating to marriage and divorce have changed in the last 30 years, they have both helped to shape and influence social attitudes, and also reflected the changes in attitudes that have taken place. The Civil Partnerships Act in 2004 enabled people of the same sex to enter in to a civil partnership, or gay marriage. This has meant that the concept of marriage has been widened beyond previous definition, and provides another option for people who may otherwise have felt forced in to a heterosexual marriage in order to conform to societies expectations. This could have an impact on patterns of heterosexual marriage because people no longer feel they need to fit a certain mould, because the law has changed to be more inclusive. Legislation has also made divorce a lot easier than before and more of an option for many people. In 1984, the law said that rather than being married for 3 years before a couple were allowed to divorce, the time was reduced to one year. The Family Law Act in 1996 said that there did not have to be any fault involved with divorce for it to be done quickly and promoting mediation to make the process easier. This turned the idea of divorce from being that of a failed marriage, and the result of someone?s mistakes or failures, to be being just another part of normal life, an acceptable next step after being married for a while. ...read more.

Social Action theorists for example say that identity is still formed by the family, which first teaches us how to interact with others. Critics say that while society is clearly changing, and this is evident in the patterns of marriage, cohabitation and divorce amongst other things, other sociological theories used in the past to explain these trends such as Marxism and Feminism cannot simply be disregarded. British society?s understanding of the form and function of a family has been changing over the last 30 years, and this has been shown in the rates of marriage falling, divorce and remarriage increasing, and cohabitation becoming a more popular lifestyle choice. Society?s values have been affected by a greater emphasis on individualism and personal fulfilment, as opposed to the traditional values of the Church, which have had more of a role in defining the family in the past. There has been an increase in awareness of equality issues too, particularly with the rise of feminism and gay rights, which have lead to changes in the law such as the Civil Partnerships Act, and legislation to increase ease of divorce. Various sociological theories have attempted to explain these changes, particularly postmodernism, but the fact that 95.1% of British women still choose to marry before the age of 49 shows that while our views on marriage and family life becoming more flexible, they still remain an important part of our society. ...read more.