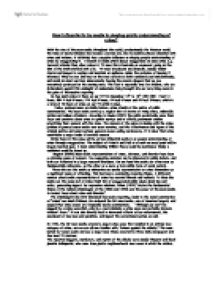 How influential is the media in shaping public understanding of crime?

How influential is the media in shaping public understanding of crime? With the rise of the mass media throughout the world, predominantly the Western world, the issue of media influence has become a serious one. Due to media's primary obsession with crime and violence, it definitely has a negative influence on shaping peoples understanding of crime by exaggerating it. A branch of media which always exaggerates on some crime e.g. terrorist attacks then other crimes is TV news this is basically an oxymoron; giving us the skin of the truth stuffed with a lie. TV news broadcasts use dramatic, usually violent stories and images to capture and maintain an audience, under the pretence of keeping it informed. What we see and hear on the news affects us both consciously and subconsciously, and sends us about our lives unnecessarily fearing the remote dangers that we see excessively portrayed on the evening news. This fact is especially true for children, who are defenceless against this onslaught of malevolence being brought into our very living rooms in the guise of informative reporting. So how much crime is there on our TV? In November 10th to 16th 2001 BBC 1 had 14 hours, BBC 2 had 5 hours, ITV had 9 hours, C4 had 5 hours and C5 had 15 hours, which is a total of 48 hours of crime on our TV within 6 days. ...read more.

The term "moral" implies that the perceived threat is not something mundane, but is a threat to the social order itself or an idealised conception of it. "The threat and its perpetrators are regarded as evil "folk devils" and excite feelings of righteousness. The dangers posed by moral panics are continuously exaggerated and distorted by the media with the result that public concern is heightened. The response is likely to be a demand for greater social regulation or control and a demand for a return to traditional values." (Cohen 1972) The term 'moral panic' suggests a dramatic and rapid overreaction to forms of deviance or wrongdoing believed to be a direct threat to society. They tend to occur at times of social upheaval when people are struggling to adjust; there is a general feeling of lack of control and declining standards. At these times people tend to group into a kind of social collective, further defined by identify victims on which all that is wrong of society may be blamed. This helps them feel better and more assured. They have someone to blame for everything that is wrong, a scapegoat or 'folk devil' as describe by Stanley Cohen. According to Jones S (2001) Moral Panic was first used by Jock Young (1971) ...read more.

The stimulus is the identification of the deviant act by the police, a politician or the media." Typically, the attention given to deviance by the media and moral entrepreneurs serves to attract new recruits and provides them with a definition of what the public expects, thus amplifying the amount of deviance in society. Therefore he stated the two types of amplification is "The amplification of deviant behavior" and "The amplification in the number of people arrested for such behavior". In conclusion media has a very big influence of peoples understanding of crime (refer back to essay). The majority of the time it has a negative influence over peoples understanding. The moral panic theory tries to prove that. Moral panics are not a new phenomenon; they tend to arise in periods of social upheaval and change. The path of a panic can take one of two directions; it can quickly die down and is more or less forgotten to a great degree or can have more serious and lasting implications such as new legislation and changes in social policy. Society plays their part, encouraged by the press - people who are in the midst of a moral panic clamour for any available news and basically believe anything they are told. Moral panics feed off guilt that is spread by contagion to make people feel more comfortable by blaming another group for their deviances. ...read more.