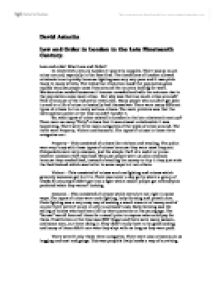 Law and Order in London in the Late Nineteenth Century.

David Astarita Law and Order in London in the Late Nineteenth Century. Law and order! What Law and Order? In nineteenth century London it was very complex. There was so much crime around, especially in the East End. The conditions of London allowed criminals to act quickly because lighting was very very poor and it was pitch black in many streets. The industrial revolution made the population grow rapidly because people came from around the country looking for work. Workers also needed homes so it became crowded and with the extreme rise in the population came more crime. But why was there so much crime around? This is because of the industrial revolution. Many people who couldn't get jobs turned to a life of crime to basically feed themselves. There were many different types of crimes but no really serious crimes. The main problem was that the metropolitan police at the time couldn't handle it. So, what types of crime existed in London in the late nineteenth century? ...read more.

There weren't only these three categories. There were also crimes such as begging and east end gangs. This was people's lively hoods a way of surviving. David Astarita But what types of punishments were given out to the criminals of the late nineteenth century London? Punishment, not one of the key words at the time for London and its Londoners. You could almost say there were Inconsistencies in punishment. Violent crime was hardly ever punished because it was poor on poor class situations which weren't considered as important. They were not taken very seriously and they were getting out of control. The police considered property crime more important because the higher/richer classes were often the victims. The police were never highly thought of because of the nature that surrounded the police. The metropolitan police of London are one of the oldest in the world but it never started out as well as it is now. In 1829 the Metropolitan Police of London were founded by the home secretary of the time Robert Peel. The common name for them at the time was the Peelers, named after the founder. ...read more.

But it wasn't all bribery and bad reputation in the police. There were quite a few successes as well. The police by the early 1900 have seemed to be winning the war against crime and by 1900, a majority of the people of London accepted that a role of the police WAS to stop political riots if one ever arose and no-one else's. One major improvement in the police was the amount of CID in 1868 when they only had 15 men but by 1884 there were over 800 men. So the Law & Order in the late nineteenth century was poor but gradually got better. No-one at the time could care less about what the police were doing for them. They just saw them there as a novelty. Robert Peel's Police force in London did what they could at the time and with no modern techniques they did what they could to keep Law & Order in London in the late nineteenth under control even if it was late after the crime had been committed. David Astarita ...read more.