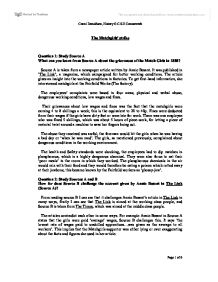 The Matchgirls' strike Question 1: Study Source A What can you learn from Source A about the grievances of the Match Girls in 1888? Source A is taken from a newspaper article written by Annie Besant. It was published in 'The Link'; a magazine, which campaigned for better working conditions. The article gives an insight into the working conditions in factories. To get first-hand information, she interviewed matchgirls at the Fairfeild Works (The factory). The employees' complaints were based in four areas; physical and verbal abuse, dangerous working conditions, low wages and fines. Their grievances about low wages and fines was the fact that the matchgirls were earning 4 to 8 shillings a week; this is the equivalent to 20 to 40p. Fines were deducted from their wages if the girls have dirty feet or were late for work. There was one employee who was fined 5 shillings, which was about 5 hours of piece-work, for letting a piece of material twist around a machine to save her fingers being cut. The abuse they received was awful; the foreman would hit the girls when he was having a bad day or 'when he was mad'. The girls, as mentioned previously, complained about dangerous conditions in the working environment. The health and Safety standards were shocking, the employees had to dip matches in phosphorous, which is a highly dangerous chemical. They were also force to eat their 'poor meals' in the room in which they worked. The phosphorous chemicals in the air would mix with their food and they would therefore be eating a poison which rotted away at their jawbone, this became known by the Fairfeild workers as 'phossy-jaw'. Question 2: Study Sources A and B How far does Source B challenge the account given by Annie Besant in The Link (Source A)? From reading source B I can see that it challenges Annie Besant's article in The Link in many ways, firstly I can see that The Link is aimed at the working class people, and Source B is taken from The Times, which was aimed at the middle class people. ...read more.

Some people such as Charles Bradlaugh who was a Member of Parliament also helped the match girls win their fight by making other M.P's aware of these issues during parliamentary discussions. The money they received was distributed widely to fund their demonstrations and so that the girls on strike would receive strike pay, which, if they had not been receiving the strike may have collapsed due to the fact that the workers needed money to support themselves and their family. The fact that their previous strikes had failed in 1871 and 1885 did not stop them. They wisely used the knowledge of these strikes to prevent mistakes and setbacks that could lead to their defeat by factory owners. The Match Girls had well-supported and well-organised demonstrations and protests, most of these lead by Annie Besant who used her middle-class status to her advantage which helped the Match Girls to win their case. The strike was a great success, so to conclude, they won due to many, many factors some of them being the amount of support, money, publicity and organisation they received. 'The girls went back to work, fines were abolished, and better wages paid.' Question 5: Study Source H. Source H says that 'the workers are well looked after'. How far is this statement supported by the evidence of Sources A to E? Source H was written by Bryant and May, the owners of the company. It states that the girls were 'well looked after' Of course they were not going to say publicly that their staff were treated badly. Using sources A -E I am going to find out how far Bryant and May's statement was supported, and how strongly it can be argued. Source A is an extract from The Link, This was a magazine that campaigned for better conditions for the working class population, and was written by Annie Besant. ...read more.

The Match Girls achieved things that was not considered possible for women or unskilled workers at that time, you could say they opened the door for women's rights and working class people. They proved that women could do things alone without having to be over-looked my men. Also the previous strikes held by the N.A.L.U, National Agricultural Labourers Union had failed and so the girls knew by using their examples what to avoid, and how to do things right, to enable them to win. The Match Girls Strike was a great success as this was the first victorious strike for unskilled workers. The organisation and support of the Match Girls' strike was clearly one of the middle classes' biggest oppositions of that time, as they refer to the staff having being 'influenced', and it was 'a pity' the workers were 'egged on' by 'sympathisers' The publicity, organisation and support form local businesses and middle class people was a big factor as to why the strike was successful. Money that the girls received, helped fund their demonstrations and gave them strike pay also upheld the length of the strike. The girls changed their own lives and the way in which working class employees were treated. Not only by this strike having been constructed by women it had been victorious in its attempts to improve working conditions. This showed that everybody has the potential to be able to revolt, strike and win, whether they were male or female. They were an inspiration to the other workers of that times, and were to many other strikes and demonstrations that were held throughout Britain and particularly to other women. This strike may have encouraged the London Dockers and Gas workers to rebel, stand up for their rights and to strike; who in 1889 had both organised strikes and succeeded. Although this strike was left out of history textbooks, I feel that it was a very significant time in history as it caused a chain reaction when other middle class workers also started to revolt and strike. Conni Donaldson, History G.C.S.E Coursework Page 1 of 6 ...read more.