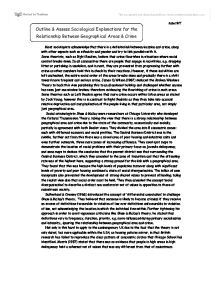 Most sociologists acknowledge that there is a definite link between location and crime, along with other aspects such as ethnicity and gender and try to link parallels with it.

Most sociologists acknowledge that there is a definite link between location and crime, along with other aspects such as ethnicity and gender and try to link parallels with it. Some theorists, such as Right Realism, believe that crime flourishes in situations where social control breaks down. In all communities there are people that engage in incivilities, e.g. dropping litter or partaking in vandalism, and in most, they are prevented from progressing further with crime as other members hold this in check by their reactions. However, if these incivilities are left unchecked, the entire social order of the areas breaks down and gradually there is a shift toward more frequent and serious crime. James Q Wilson (1982) deduced the Broken Windows Theory to back this view paralleling this to an abandoned building and challenged whether anyone has seen just one window broken; therefore evidencing the flourishing of crime in such areas. Some theories such as Left Realism agree that more crime occurs within Urban areas as stated by Jock Young, however this is in contrast to Right Realists as they then take into account relative deprivation and marginalisation of the people living in that particular area, not simply just geographical area. ...read more.

Further tightening his approach in order to avoid vagueness criticisms like Shaw & McKay's theory, he stated that definitions vary in frequency, duration, priority, e.g. more influenced during primary socialisation and intensity., ignoring the relationship between geographical area and crime. Not only is this hard to apply to the contemporary UK due to the fact that the theory is not only dated, but more applicable within the USA, as housing policies mirror, in that British research has failed to reproduce the clear pattern of concentric circles that Chicago School has identified. Morris (1957) stated that there was no evidence that people in high areas in high delinquency held a coherent set of values that was any different from that of mainstream society, ignoring the relationship between location and crime, the reason being the council's housing policies in his study of Croydon, the council kept high-problem families together so that almost by definition, it was a high-crime area. To expand on this, applicable to the high-problem zone in Shaw & McKay's theory is the process of 'tipping'. ...read more.

Another theory similar to this was that developed by various sociologists named 'Cognitive Maps'. Patricia and Paul Brantingham, for example, argue that people have different perceptions to others of the area in which they live, depending upon where they live and routes to and from work. Each person then carries in their mind a different image of their city; called a cognitive map. Wiles & Costello extended this further when they studied offenders in Sheffield; finding that offenders on average travelled approximately two miles to commit offences and invariably the area chosen was based on strategic decisions within their routine activities and cognitive maps. In contrast to these, administrative criminology theories such as these have been criticised by Jock Young, as they do not explain why people commit offences within these areas, merely the circumstances that they are more likely to commit them within. Furthermore, it seems illogical that offenders makes calculated decision regarding offending, as some other studies suggest that these are mostly not rational, motivated purely by thrills and the search for excitement, such as that of Katz Pleasure of Crime in the instance of joyriding within contemporary society. ?? ?? ?? ?? Kate Iliff ...read more.