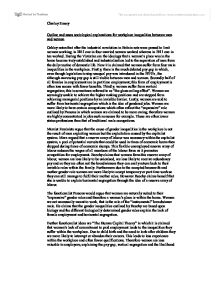 Outline and a***s sociological explanations for workplace inequalities between men and women Oakley notes that after the industrial revolution in Britain acts were passed to limit women working; in 1851 one in four married women worked whereas in 1911 one in ten worked. During the Victorian era the ideology that a woman's place was in the home became truly established and industrialisation led to the separation of men from the daily routine of domestic life. Now it is claimed that women suffer from four main inequalities in the workplace. Firstly, there is the much debated pay gap in which, even though legislation to stop unequal pay was introduced in the 1970's, the although narrowing pay gap is still visible between men and women. Secondly half of all females in employment are in part time employment; this form of employment is often less secure with fewer benefits. Thirdly, women suffer from vertical segregation; this is sometimes referred to as "the glass ceiling effect". Women are seemingly unable to achieve the higher ranking positions and are stopped from achieving managerial positions by an invisible barrier. Lastly, women are said to suffer from horizontal segregation which is the idea of gendered jobs. ...read more.

Employers use the different labour markets to obtain the different levels of skills that they need to perform different tasks. Barron and Norris claim that men and women both appear within the secondary market, but that it is mainly women. This inequality of women within the workplace is due to the employers being able to ascribe certain characteristics which make them suited to the secondary market; they are generally not the breadwinners and have less interest in gaining new skills are two examples given. Barron and Norris are able to look at discrimination without too much focus on family life while stressing that structures outside female control create the workplace inequalities. Beechy is critical of the Dual Labour Market Theory as it is unable to explain why women in skilled professions, she gives the example of the textile industry, still receive lower pay. Furthermore she criticises Barron and Norris for not explaining why women gain less promotions than men who do the same jobs as women. Radical Feminists move away from blaming social inequalities on the capitalist base but instead blame the exploitation of women on men. ...read more.

Ginn et al agree that there is often a misleading picture created about the increase in equality within work, however they criticise Hakim for ignoring cultural norms within the workplace and the family which make it difficult for women to gain equality. Hakim largely ignores the cultural and ideological background. It is hard to say whether structural problems or cultural attitudes create inequalities within the workplace. However it is apparent, by looking at horizontal segregation that expected gender roles create inequality within the workplace. Although as more women infiltrate traditional male occupations it is possible to argue that gender roles are becoming less important. Furthermore, if one is to follow a functionalist line of argument, women are now doing better than men at gaining qualifications so will it now be that women start achieving more of the top jobs than men? However biology will always have an effect as women who wish to have children will require maternity leave and this may lead to opinions that women are not taking their career as seriously. Radical feminists such as Firestone claim that although contraception is assisting equality between the sexes it is not until babies are able to be made outside the womb will gender equalities truly have a chance of existing. ?? ?? ?? ?? Charley Emery ...read more.

It is full of well developed theory and studies. Its particular strength is the articulate way the writer expresses herself. Candidates can learn to write like this by reading more widely, as this helps us to become familiar with good writing.