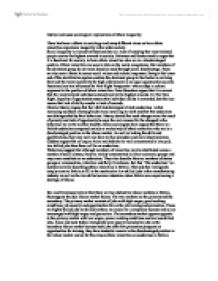 Outline and a***s sociological explanations of ethnic inequality. There has been a debate in sociology and many different views on how ethnic minorities experience inequality in the wider society. Social inequality is viewed by functionalists as a way of ensuring that most talented people receive the highest rewards in society. Patterson and Banton tend to argue that it is functional for society to have ethnic minorities who are in a disadvantaged position. Ethnic minorities are seen to take on the worst occupations, that members of the dominant group do not want, based on need through social disadvantage. There are also seen a threat to scarce social values and cultural responses. Being at the lower end of the stratification system enables the dominant group to feel better in realizing they lack the talent and ability for high achievement in an equal opportunities society. Functionalism has influenced he New Right Perspective whom adopt a cultural argument to the position of ethnic minorities. Peter Saunders argues that it is correct that the most talented individuals should receive the highest rewards. To The New Right, Equality of opportunity ensures that individual ability is rewarded, but this also means that lack of ability results in lack of rewards. Charles Murray argues that the USA had developed a black underclass in that increasing numbers of young blacks were unwilling to work and that this underclass was distinguished by their behaviour. ...read more.

They feel suspicious of police and feel they receive the worst treatment. Young and Lea argue that urban riots can be partly explained by the political marginalisation of black people. Saunders describes the underclass as almost entirely dependent on welfare provisions and Dahrendorf fears that members of the underclass may lose the work habit as they become accustomed to life on the dole. Young black people have tried to get jobs but fail due to racial discrimination. It makes little sense, then to regard ethnic minorities as a whole underclass although the concept is useful for showing how certain groups are trapped in situations where they face a high risk of becoming poor, unqualified or unemployed. There are important socio-economic differences between ethnic groups and a wide range of circumstances within each group. For example there are substantial numbers of well qualified persons within the black community and so 'average' levels are misleading. Rex and Tomlinson admitted there was a considerable overlap between black minorities and the white population. Most people are members of the exploited working class and it is this rather than their racial or ethnic features, which largely dictates their fate in British society in other words if we didn't have capitalism we wouldn't have r****m. Economic conflicts are primary and the ethnic and racial problems which they create are merely secondary. Milliband argues that white workers resort to racial discrimination in a desperate attempt to improve their bargaining power in the competitive climate of a capital economy. ...read more.

They agree with Castle and Kosack in that ethnic minority workers form a distinctive stratum within the working class, however deny that immigrant and migrant workers have actually created divisions in the working class. They point out that the working class can also been seen as divided by gender and level of skill. Working class women sell their labour for a wage in the same way as working class men, but unlike men they have other unpaid domestic responsibilities. To Phizaklea and miles, the working class is not divided into two but is split between a considerable number of class fractions based upon gender, skill and ethnicity. Immigration did not divide a united working class; it just added an extra dimension to existing divisions. We may question whether the term 'migrant; is still appropriate now that so many of Britain's black population were born in this country Despite the differences between the Weberian and Marxist theories on ethnicity, they share a good deal in common. Pilkington believes that Weberian and Marxist theories are not supported by empirical evidence, he quotes figures that showed that, amongst west Indians and Guyanse, 32 percent of men and 63 percent of women were found in non manual occupations. Among Indians the figures were 59 percent fro men and 62 for women and among Pakistani/Bangladeshis they were 40 percent for men and 64 for women. Pilkington fully accepts that ethnic minorities are not overwhelmingly concentrated in an underclass. Indeed, certain ethnic groups have been extremely successful in the labour market such as Chinese and African Asians. ?? ?? ?? ?? ...read more.