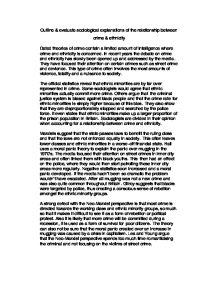 Outline & evaluate sociological explanations of the relationship between crime & ethnicity Dated theories of crime contain a limited amount of intelligence where crime and ethnicity is concerned. In recent years the debate on crime and ethnicity has slowly been opened up and addressed by the media. They have focused their attention on certain crimes such as street crime and deviance. This type of crime often involves the most amounts of violence, fatality and a nuisance to society. The official statistics reveal that ethnic minorities are by far over represented in crime. Some sociologists would agree that ethnic minorities actually commit more crime. Others argue that the criminal justice system is biased against black people and that the crime rate for ethnic minorities is simply higher because of this bias. They also show that they are disproportionately stopped and searched by the police force. It even states that ethnic minorities make up a larger proportion of the prison population in Britain. Sociologists are divided in their opinion when accounting for a relationship between crime and ethnicity. ...read more.

Also it is likely that more crime will be committed during a recession, it is used as a form of survival for poor citizens. The theory can also not be sure that the moral panic created over an increase in mugging was caused by a crisis in capitalism. Lea and Young argue that the Neo-Marxist perspective spends too much time romanticising the criminal and not focusing on the victims of street crime. Interactionists reject the use of official statistics when it comes to analysing crime. Cicourel suggests that there is a negotiation of justice when on patrol. It is after all a police officers decision to stop and interrogate an individual based on the meanings of what is suspicious and strange. As the process is negotiable and based on appearance, an individual that withholds a stereotypical appearance of an offender is more likely to be arrested. Even though the stereotype concludes someone of an ethnic nature, this still applies to white citizens. A working class individual is also just as likely to be labelled as a deviant character. ...read more.

This has been accused of unintentionally promoting r****t attitudes amongst the public. New left realists also argue black groups have become marginalised and pushed to the edges of society, where it is hard to allocate themselves a job and to maintain a financially stable life style. This is due to limited educational opportunities, due to a lack of strong educational support in poorer areas. As relative deprivation will affect poorer groups in society, subcultures are likely to be formed as a result of a lower standard of living than the majority of the population. On discussion of diversity within ethnic groups, it accounts of why Afro-Caribbean's are over represented, which falls into doubt when British Asians are concerned. If police discriminate against blacks they must discriminate in favour of Asians since fewer are arrested. To conclude, the relationship between crime and ethnicity is far from straight forward. An insight from all other social variables needs to be taken into consideration. Evidence suggests that relationships between poverty and ethnicity maybe important when studying explanations into crime and deviance. As it stands today, there is still a large over representation of black crime which will continue to happen until a solution to cut out r****m from our society works correctly. ...read more.