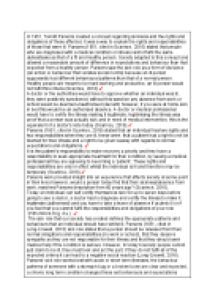 This essay will evaluate three groups within society; the Feminists, Postmodernists and the Marxists, providing information and supporting the theory that medicine is being used as an institution of social control.

Transfer-Encoding: chunked ï»¿In 1951, Talcott Parsons created a concept regarding sickness and the rights and obligations of those affected, it was a way to explain the rights and responsibilities of those that were ill. Parsons (1951, cited in Scarince, 2016) stated that people who are diagnosed with a medical condition or illness cannot fulfil the same duties/tasks as that of a fit and healthy person. Society adapted to this concept and allowed a reasonable amount of difference in expectations and behaviour than that expected from a healthy person. Parsons saw the sick role as a form of deviance (an action or behaviour that violates social norms) because an ill person supposedly had different behavioural patterns than that of a normal person. Healthy people are meant to be hard-working and productive, an ill person would not fulfil this criteria (Scarince, 2016).â A doctor or the authorities would have to approve whether an individual was ill, they were positively sanctioned, without this sanction any absence from work or school would be deemed unauthorised (deviant) however, if you were at home sick in bed this would be an authorised absence. A doctor or medical professional would have to certify the illness making it legitimate; legitimising the illness was proof that a person was actually sick and in need of medical intervention, this is the equivalent of a doctor's note today (Scarince, 2016).â Parsons (1951, cited in Scarince, 2016) stated that an individual has two rights and two responsibilities when they are ill, these were; that a patient has a right to not be blamed for their illness and a right to be given leeway with regards to normal expectations and obligations. ...read more.

The Boston Women?s Health Book Collective - Our Bodies, Ourselves (2011), states that corporate and pharmaceutical interests influence medical research, information and care. This leads to the unwarranted medical surveillance of a woman's body, with them wanting to reclaim control from male-dominated medicine (Boston Women?s Health Book Collective, 2011). Women receive a disproportionate amount of attention to their health with intrusive surveillance and interventions such as; mammography, smear tests, infertility treatments, and prenatal care, as well as reproductive health and aesthetic procedures. For example: Menopause- has been medicalised since the 1930?s as a disease of deficiency, often recommending hormone replacement therapy as treatment, Infertility- was once considered an individual or social problem, it is now deemed fixable and over time has come under the scrutiny of medical professionals. Infertile couples now seek medical interventions to enhance their reproductive capabilities (Waggoner and Stults, 2010). Pregnancy and childbirth- this is the clearest example of medicalisation in females, it has changed throughout the years. It was once a social event that occurred in the home with a midwife, now it is set in the medical environment of a hospital with an obstetrician and doctor (Waggoner and Stults, 2010). These are naturally occurring life events that the medical profession has defined and rebranded. They now need a diagnosis, treatment and can cause medical problems (Brandeis University, 2010). To widen the scale of control medicalisation also takes control of biomedical and cosmetic enhancements within women; this is a form of self-improvement in a contemporary society. ...read more.

The health care system within capitalism results from the interaction between the social classes. Capitalism provides technologies and advances which allow different relationships and forms of healthcare to emerge. The social relationship between labour (the proletariat) and capital (the bourgeoisie) affects the social force that sets the agenda for the health care system (Goodman, 2013). Marxists are interested in a capitalist society, they believe that medicine is a market commodity that can be bought and sold like any other product. An example of this can be found with the aids drug, it was purchased by a pharmaceuticals CEO who raised the price by 5000%, he also raised the price of a medication taken by children for a rare kidney disease. This causes health services to refuse the purchase of these drugs as they are too expensive, regardless of their effectiveness. Meaning that only individuals from upper classes would be able to afford these medications (Dearden, 2015). To summarise, the above models can be seen as negative models of social control. Intrusive procedures and medical intervention for normal life events are a form of control. Society can also be controlled via surveillance by institutions, companies and the medical profession and also by using capitalism to raise the price of pharmaceuticals. Whilst these are negative factors they can also be seen as positive. The information collated from the fitness trackers and also the results collated from some of the intrusive tests can provide vital health information to individuals. This information can then be used to improve their wellbeing, moving them from ill to healthy, leading to a longer life expectancy and a healthier lifestyle. ...read more.