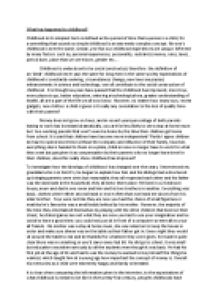 To investigate how the ideology of childhood has changed over the years, I interviewed my granddad who is in his 60s,

﻿What has happened to childhood? Childhood in its simplest term is defined as the period of time that a person is a child, for a something that sounds so simple childhood is an extremely complex concept. No-one?s childhood is ever the same, similar, yes! But our childhood experiences are unique. Affected by many factors such as; personal experiences, personality, restraints (money, rules, laws) , period born, place that we were born, gender etc? . Childhood is understood to be social constructed, therefore the definition of an ?ideal? childhood never says the same for long even in the same society expectations of childhood is constantly evolving, circumstances change; new laws are passed, enhancements in science and technology, war all contribute to the social construction of childhood. It is thought as years have passed that the childhood has improved; more toys, more places to go, better education, entering a technological era, greater understanding of health, all are a part of the life we all now know. ...read more.

Toys were not like they are now you had the choice of small figurines or marbles he?s favourite was a small teddy knitted by his mother. However, the majority of the time they entertained themselves by playing with the other children that lived on their street, he stated games are not what they are now you had to use your imagination and be social to have a good time, you could not just sit in front of a computer screen talk to your all friends. His mother was a stay at home mum, she was relied on to keep the house in order and make sure dinner was on the table as their father got in. Every night they would sit around the table to eat and be thankful for whatever they were given, he made it quite clear there was no snacking so you?d saver every last bit. He did go to school, it was small but education was taken seriously by all the students even though it was basic. ...read more.

I have been focusing on the stereotypical childhood of a child in a more economically developed country, I have concluded that childhood has both progressed in a positive as well as negative way. But what about in other countries? How have their children?s childhood changed? In Asia children are used as slave labourers, and for what exactly? To fulfil the wants of others in more economically developed countries. Children are taken away from their families and made to work in sweatshops to produce the materialistic possessions that apparently have improved other children?s childhood so greatly. Children in these countries are made to grow up so quickly that it can be said they have no childhood at all, they are seen to be young adults, they have to; provide for their family, work before they are even given a proper or any education, the eldest children are made to care for their younger siblings, becoming parents before they even have children of their own. Seems childhood is slowly disintegrating our corrupt and colluded world has forgotten about its children that now even the child protection laws are no longer abided by. ...read more.