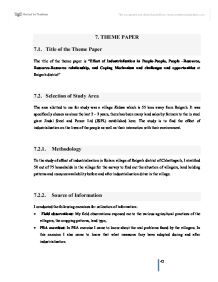 To the study of effect of industrialisation in Kolam village of Raigarh district of Chhattisgarh, I stratified 50 out of 75 households in the village for the survey to find out the situation of villagers, land holding patterns and resource availability be

7. THEME PAPER 1. 2. 3. 4. 5. 6. 7. 7.1. Title of the Theme Paper The title of the theme paper is "Effect of Industrialisation in People-People, People -Resource, Resource-Resource relationship, and Coping Mechanism and challenges and opportunities at Raigarh district" 7.2. Selection of Study Area The area allotted to me for study was a village Kolam which is 55 kms away from Raigarh. It was specifically chosen as since the last 2 - 3 years, there has been many land sales by farmers to the in steel giant Jindal Steel and Power Ltd (JSPL) established here. The study is to find the effect of industrialisation on the lives of the people as well as their interaction with their environment. 7.2.1. Methodology To the study of effect of industrialisation in Kolam village of Raigarh district of Chhattisgarh, I stratified 50 out of 75 households in the village for the survey to find out the situation of villagers, land holding patterns and resource availability before and after industrialisation drive in the village. 7.2.2. Source of Information I conducted the following exercises for collection of information: * Field observations: My field observations exposed me to the various agricultural practices of the villagers, the cropping patterns, land type, * PRA exercises: In PRA exercise I came to know about the real problems faced by the villagers. In this exercise I also came to know that what measures they have adopted during and after industrialisation. * Focused group discussion: As my topic was related to industrialisation so I explored the ideas of the respondents about it and their perception about the way ahead. I also focused their discussion on the prospect of reeling Tasar silk yarn. * Questionnaire: I used a structured open ended questionnaire for getting the information from the respondents. The methodology I adopted for the collection of data to carry out the study is categorized into two types: i. ...read more.

But after industrialisation they can afford 12 months of food availability without much effort. This is because they now have more money in their hands than before and as such their purchasing power as well as bargaining power has increased. Table 6: Food Availability Food availability Before (2008-09) After (2009-10) No of Month (Average) 8.84 12 e) Assets Position: Agricultural input includes plough, thresher (wooden), etc. After industrialisation the agricultural inputs increased by 21.42%; number of tractors increased by 150%; number of private wells increased by 475%; motor engines increased by 125%; vehicles whether two or four wheelers increased by 225%; gobar gas installation at homes increased by 100%; bullock cart holders increased by 40%; telephone (mobiles) increased by 166.67%; number of refrigerators increased by 100%; number of television sets increased by 121.43%; Table 7: Assets Position Before and After Industrialisation Assets Before (2008-09) After (2009-10) % Increase Agricultural input 28 34 21.42857 Tractor 4 10 150 Well 4 23 475 Motor /engine 4 9 125 Vehicle 8 26 225 Gobar gas 2 4 100 Bullock cart 15 21 40 Telephone 12 32 166.6667 Refrigerator 2 4 100 TV 14 31 121.4286 No of rooms 105 105 7.4. People - People Relationships People - people relationships relate to the social structure and the interaction between the classes of the society. Here in my area of study i.e. village Kolam there is a class system based on the following: * Upper class or Rich * Middle class or Medium * Lower class or Poor The upper class comprises of people from the upper strata of the caste hierarchy such as the Brahmins and also people who own considerable amount of wealth such as the Brahmins. Here wealth would mean wet land, education level, house type, whether they have jobs or businesses, number of vehicles owned by them, irrigation facilities, health condition, etc. The middle class comprises of the middle strata of the caste hierarchy and people who have marginal land holdings, and vehicles such as motorbike or bicycles, such as the Sidars, Rathiyas, Yadavs, Chouhans and Nais in the village. ...read more.

JSPL started to buy land from the people @ Rs 3.5 Lakhs/ acre. This led many people to sell their land to make a profit of the opportunity as the market price of land at that time was upto Rs 3 Lakhs/ acre. Now they have money but they sold their cultivable land. Some of the coping mechanisms are listed below: * Sale of land in Kolam and purchase of land in nearby villages. * Invested money in banks in Fixed Deposits (FDs) * Purchased cars and using it for rental purpose * Bought water pumps and also to install a bore well near their fields * Bought livestock of the money realized by the sale of their land The challenge faced by them is just their remoteness from the urban area. It is 14 kms away from Tamnar, its development block. After the acquisition of land JSPL walled its boundary with concrete walls making many of the people living on the nearby of the village and of the village to commute in a different route taking a lot more time than before. Many grocery stores which boasted of customers from different nearby villages now don't have their earlier shine. People coming from different villages to the Sunday weekly haat in the village are reducing. As far as opportunities are concerned, Kolam has a great advantage here as the industry is establishing its plant in the village bringing people from different states to this village. * These people need accommodation and people in the village can reap the benefits out of this opportunity by constructing extra rooms in their homes to give it for rent. * People of this village can also benefit from this by installing more grocery stores. There is also scope for other businesses to emerge after the establishment of the plant here. * Also people who own livestock like cows, hens, chickens and goats can reap the benefits of this opportunity by selling milk, chicken, eggs and mutton to the people who work at the plant and also to the nearby villages. ?? ?? ?? ?? 42 ...read more.