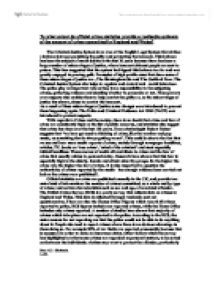 To what extent do official crime statistics provide a realisable estimate of the amount of crime committed in England and Wales? The Criminal Justice System is an area of the English Legal System that strikes a balance between punishing the guilty and protecting the innocent. This balance has been the subject of much debate in the last 20 years because there has been a large number of miscarriages of justice, where innocent citizens/ people are sent to prison. This then suggested that the system had tipped this balance too far and was greatly engaged in proving guilt. Examples of high profile cases that show some of these miscarriages of justice are , The Birmingham Six and The Guilford Four. The Criminal Justice System also helps to regulate and control anti - social behaviour. The police play an important role as they have responsibility for investigating crimes, gathering evidence and deciding whether to prosecute or not. These powers over suspects also enables them to help convict the guilty or, as the miscarriages of justice has shown, abuse to convict the innocent. As a result of these miscarriages of justice some changes were introduced to prevent them happening again. The Police and Criminal Evidence Act 1984 (PACE) ...read more.

According to the BCS, the main reasons for not reporting are that the police would not be able to do anything about it. People also tend to report crimes where there is an obvious advantage in them doing so. For example 98% of car thefts are reported presumably because that is necessary in order to make an insurance claim. Other factors which the survey has highlighted are that some crimes are regarded as personal matters, to be sorted out between the individuals; victims may want to protect the offender, particularly in crimes such as child abuse or domestic violence; and the victims are too embarrassed especially when the offence is of a sexual nature. Even where a crime has been reported to ( or discovered by ) the police, it will not necessarily end up being recorded by them because they have a wide discretion regarding the recording of crime. They may see the crime as too trivial to waste their time on (theft of a small amount of money) and in some cases whether an individual's behaviour is regarded as a crime depends on how they label an offender. ...read more.

So in order to get detailed and accurate crime figures; * Stereotypical view of criminals should be erased. Most officers suggest that most crime is committed by young, working-class, black males and sometimes are more heavily represented than might be expected from the proportion of the population that they make up. * Reality of crime statistics should be presented not the picture of crime as a whole. In some geographical groups or areas, police are too busy trying to picture the whole frame of crime and in doing so forget the reality of crimes statistics for these minor groups or areas. * There should be more police on the streets so that as people get more familiar with them, they'll have more confidence to report more. * Repeat victimisation should be reflected properly as they help to make decisions on policy and allocation of resources. So six burglaries in the same estate should not be recorded as one. * All police force should be made to report crime in similar ways in order to make figures comparable. Which includes recording anything reported as a crime as a crime. And also no crime should be seen as too 'trivial', as only a few of summary offences are reported. ?? ?? ?? ?? Seun Alli - Shobande. LAW. ...read more.