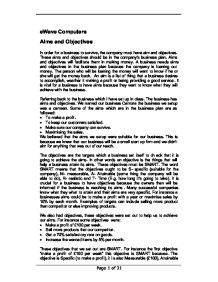 * Build a strong residual income through website design and maintenance and online advertising which will now be their primary activity. * Build partnerships with smaller companies through activities to publicise the company. Objectives I would set them are: * Turnover of �200,000 by December 2007. * Net profit of 10% from January 2007 - June 2007 and 20% from July 2007 - December 2007. * 33% gross margin by December 2007. * Establish a minimum of 3 online services per week. * Advertise to a minimum of 100 businesses by December 2007. I believe eWave have the potentials to be a real threat to the business industry. However if they continue the way they are going they will achieve nothing. I have recommended many aspects which are strong and week. I have faith that if they concentrate on these aspects they will eventually be successful. Report on the market for home computers PC sales has fallen dramatically for fifteen years, this was due to the slow economic growth. This widespread hit the US which accounts 40% of the world market. A research firm named "Gartner Dataquest" has revealed that this is mainly due to the poor economy. The poor economy was due to the fact that there was unemployment this meant that people didn't have enough money to buy services or items. The name to this situation is rescission. People are worried that the slow growth of the computer industry is reaching Europe and Asia. Despite the downfall in computer sales US giants Dell still managed to hold the top spot as market leaders. Earlier this year Dell took over the top spot from Compaq. Dell increased its share of global sales to 13.8%, up from 11% a year ago. Tiny was a renowned company in the computer industry. Tiny's arch computer rivals time bought the company through its shares. The company had new plans. ...read more.

There share price was decreasing as more shareholders were pulling out because they believed Sainsbury will become bankrupt then they turned to Tesco as they were taking all there customers. Sainsbury's has issued three profit warnings that year as problems mounted, and since the start of 2004 its shares have underperformed rival food retailers by 23% Cash flow because customers were leaving to there rival. Stock because they had improper stock control and people weren't getting there need as it was out of stock. Shares, share holders left because they believed Sainsbury will become bankrupt. Recommendation As I stated before no business is perfect there always is space for improvements. I believe that Sainsbury's should start to improve where they got their main issue. Issues like stocks. A lot of stock is lost by theft. This will affect the cash flow as food is being stolen so the company will make fewer profits. Theft is happening every from customers to staff. This is why I believe that security should be improved. Security should be improved. There are many ways where security can be improved. For instance face recognition. This system will recognise the face of people who have been previously convicted of theft. The system will automatically alert the guard they will either monitor the person or tell them to leave. More over staff will also be monitored for thet as some staff do steal. Many customers complain of waiting in quays. If Sainsbury's introduce the self check out system then not many people will be complaining. This system goes by it name the customers pay the money of the good to the computer. The customer check them self out. Figure 7- an example of a self check out Taste of Success Active Kids complements our successful 'Taste of Success' programme. This promotes food education and cookery in schools. Supported by the Department for Education and Skills, more than 250,000 school children have been involved so far. ?? ?? ?? ?? Page 1 of 24 ...read more.