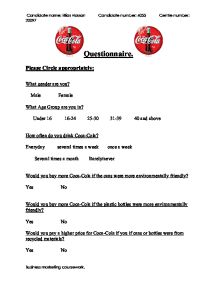 Would you buy more Coca-Cola if they contributed more to `third-world debt`? Yes- 76.6% No- 23.4% Most people are willing to help others according to this questionnaire. Coca-Cola should consider raising their prices slightly to help others who are so fortunate, they should also consider the money going to third-world debt, and if that will affect their total profit. Also, it will again give the business a good reputation which is always appropriate for large companies. Many people who said `no` may have done this to the worldwide financial crisis. Would you pay a higher price for Coca-Cola if you knew they were supporting `third-world` families? Yes- 97.6% No-2.4% This shows that people are willing to pay more for others, who need help. However, this question shows that a higher percentage of people are willing to pay higher, this is unusual because of the finical crisis. Also, Coca-Cola should again consider if they make again about the profit margin. Nevertheless, Coca-Cola will get a good reputation from the public for helping others; a good reputation is something money can't buy. Do you think Coca-Cola can be part of a healthy life-style? ...read more.

Coca-Cola should also try to consider using biodegradable materials, because this will give Coca-Cola a good reputation. A reputation is something that is essential in a successful business; Coca-Cola has high reputation and should try to increase it using recycled/biodegradable, if this is successful then they can again further increase profits. Recommendation two: I recommend to Coca-Cola that they try to give a certain percentage of the profit to charity. This will show the public that Coca-Cola is a caring company and cares about others. Also, if they increase their price slightly per can/bottle the excess money good go to charity; therefore they don't lose any money and the reputation has increased drastically. This questionnaire shows that people are willing to pay more for a can if they knew that a percentage of the money was going to charity. Also, I will again mention that a good reputation is something that you have to earn; and by helping others Coca-Cola will please customers. Also, they will think that when they are buying it they are helping others o that also improves ales. However, this could be very risky because demand for Coca-Cola could increase rapidly and the production will not be able to keep up so ?? ?? ?? ?? Candidate name: Ellias Hassan Candidate number: 4055 Centre number: 20097 Business marketing coursework. ...read more.