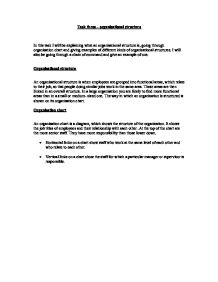 Divisions can be by Function, Product or Geography. By Function MD Sales Finance Production Marketing By Product MD Plastics Fertilises Drugs Cosmetics By Geography MC Donald's (USA) Mc Donald's Mc Donalds Mc Donalds (UK) (France) (Germany) Organisations have problems maintaining a flat structure as they expand. Advantages with a flat structure * Communication is better (because there are less layers of hierarchy) * People are more friendly and sociable * The employees have more responsibility (so they feel valued and they are motivated) Disadvantages with a flat structure * You can only employee a certain amount of staff (so the structure stays flat) * More responsibility to the staff below i.e. this could be a problem because staff may not have the right skills for the job. Each level in the organisation chart has more responsibility and authorities than the level below .I have drawn a diagram to show who has got the most responsibility to who has got the least. It is in a pyramid shape. Managing director Directors Managers Supervisors Shop floor workers Chain of command This is the path down which orders and demands are passed from the top of the organisation to the bottom. In a company this goes from the board of directors down to shop floor workers. Below is an example of one of Jaguars chain of command from the Product Engineering function: Director of product Engineering Manager Production supervisors Team ...read more.

who is not * You cannot tell who is the best worker, nor who willingly takes on additional responsibility, nor who is most likely to get the next promotion. * You cannot tell from the chart weather the style of company is formal or informal, whether management is fair or hash, whether the organisation would be good to work for or not I have thought about some suggestions that could improve Jaguars organisational structure and the way the business functions. * Delayering - large businesses try to resolve this problem by flattening the chain of command by delayering. This involves cutting out large numbers of middle managers and pushing responsibility and decision making further down the chain * Shorter chain of command - otherwise messages can get lost or distorted, it takes longer between decisions being made and action taken and it can be more difficult to make changes, as there are more groups to resist change. * Jaguar could use the Matrix structure - this is where the businesses is organised into different functions (or departments), but people from each department work together on special project teams. E.g. an example of a special project team might be the development of a new product. (E.g. car) a team of people from different department/functions will work together to develop the product. So each member would be in charge of: * Marketing * Production * Human Resources * Finance ...read more.