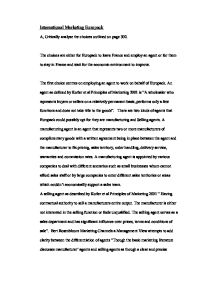 International Marketing Europack A, Critically analyse the choices outlined on page 302. The choices are either for Europack to leave France and employ an agent or for them to stay in France and wait for the economic environment to improve. The first choice centres on employing an agent to work on behalf of Europack. An agent as defined by Kotler et al Principles of Marketing 2001 is "A wholesaler who represents buyers or sellers on a relatively permanent basis, performs only a few functions and does not take title to the goods". There are two kinds of agents that Europack could possibly opt for they are manufacturing and Selling agents. A manufacturing agent is an agent that represents two or more manufacturers of complimentary goods with a written agreement being in place between the agent and the manufacturer to fix pricing, sales territory, order handling, delivery service, warranties and commission rates. A manufacturing agent is appointed by various companies to deal with different scenarios such as small businesses whom cannot afford sales staff or by large companies to enter different sales territories or areas which couldn't economically support a sales team. A selling agent as described by Kotler et al Principles of Marketing 2001 " Having contractual authority to sell a manufacturers entire output. The manufacturer is either not interested in the selling function or feels unqualified. The selling agent serves as a sales department and has significant influence over prices, terms and conditions of sale". Bert Rosenbloom Marketing Channels a Management View attempts to add clarity between the differentiation of agents "Though the basic marketing literature discusses manufacturer' agents and selling agents as though a clear and precise distinction exists between them, in practice such a distinction is not usually made. In fact, it is quite common to use terms such as sales agent, selling agent, manufacturers' agent, manufacturers' representatives, reps, or export/import agents interchangeably to refer to all types of agent and wholesaler without any strict distinctions made about the degree to which they perform distribution tasks. ...read more.

The review of the sales staff, improved communication channels and recruitment/training of staff could also lead to improvements in staff morale. As staff morale has been blamed as a major factor in the sales teams failures any improvement would be welcomed by Europack, as motivated staff are more likely to improve sales figures. The most significant factor that could dictate Europacks decision to stay in France is the introduction of the Euro as fluctuations between the Franc and the Deutschmark would no longer affect profitability. In the past two years the Deutschmark being stronger than the Franc has been a factor in Europacks performance, which has seen profits depreciate due to exchange rate fluctuations this with the Euro in circulation, is a problem of the past. Along with advantages to keeping operations in France there are inevitably disadvantages. A major factor that would be the fact that a poor economic environment or recession can last for a number of years as David Hall et al Business Studies 1999 states " in the early 1990's the UK suffered a recession and a falling demand for goods and services. This resulted in a considerable hardship for many firms - approximately 73,000 individuals and companies were forced out of business in 1992. By 1997 this had fallen to 40,000 as trading conditions had improved". The fact that a poor economic environment can last a number of years could mean that the period of poor economic conditions is too much for Europack to withstand. Linked with why Europack could struggle in a long-term poor economic environment is the issue of confidence as David Hall et al Business Studies 1999 states "There tends to be a general lack of confidence amongst businesses during a recession. This can lead to investment projects being cancelled and orders being lost. Some businesses will not only for the period of the recession itself, but also in the longer term. ...read more.

However the clearest advantage to Europack of using market segmentation is the fact that in such a competitive sector it is important to find market segments with few competitors thus creating competition and entry into a new segment that in turn increases Europacks growth and increases sales revenue. As Europack is already involved in niche markets with Frisch future targeting of niche markets should also be encouraged as niche marketing can be developed from segment marketing as niche marketing by definition is "Adapting to a company's offerings to more closely match the needs of one or more sub segments where there is often little competition". As defined by Kotler et al Principles of Marketing 1999. The area of segmentation and niche marketing are vital if Europack are to expand into other markets and increase market share in a highly competitive environment. The aim of Europack must be to become the come that all its competition uses as the industry benchmark. In essence the marketing programme that Europack should adopt starts by building solid foundations in terms of creating a loyal customer base from which to develop from. The idea of introducing a matrix structure within in the sales team is to alleviate all communication problems and allow head office the control they desire. As well as creating the matrix system staff issues are dealt with by replacing under performing staff and introducing continuous training thus dealing with the issues of staff moral to an extent though the Europacks HRM department should produce a plan centred on issues of staff moral. The last part of the marketing programme is aimed at ways of creating growth and with the stiff competition Europak faces in a highly competitive arena they have little choice but to enter market segments and niche markets where the competition is limited. The aims of the marketing programme for Europack are to create a business that could withstand a economic decline and start to grow as stagnant and declining sales revenue are not acceptable to any business. Word count 4326 ...read more.