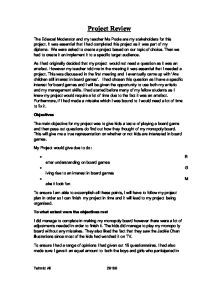 Project Review Edexcel Diploma. The main objective for my project was to give kids a taste of playing a board game and then pass out questions do find out how they thought of my monopoly board. This will give me a true representation on whether or not kid

Project Review The Edexcel Moderator and my teacher Ms Poole are my stakeholders for this project. It was essential that I had completed this project as it was part of my diploma. We were asked to create a project based on our topic of choice. Then we had to create it an implement it to a specific target audience. As I had originally decided that my project would not need a question as it was an artefact. However my teacher told me in the meeting it was essential that I needed a project. This was discussed in the first meeting and I eventually came up with 'Are children still interest in board games'. I had chosen this question as I have a specific interest for board games and I will be given the opportunity to use both my artistic and my management skills. I had started before many of my fellow students as I knew my project would require a lot of time due to the fact it was an artefact. Furthermore, if I had made a mistake which I was bound to I would need a lot of time to fix it. Objectives The main objective for my project was to give kids a taste of playing a board game and then pass out questions do find out how they thought of my monopoly board. This will give me a true representation on whether or not kids are interested in board games. ...read more.

Although other people had chosen 'Too detailed' because they think that I placed too much information on one action to do and thought that within in the start and finishing time, too much specific information was placed in and thought that it would be hard to stay in the time zone whilst working on something hard and specific like research. Next I had asked that If they had selected ' Needs to be more detailed', what do they think I should add and one specific person had said "you could have explained how things had to be done" ; This meant that I had to add more information and spread them all about rather than doing many information on one thing and not really on the other. Then I had asked, Do you think its easy to follow? and majority had selected No, which meant that I should have made everything more simple and if I had members who wanted to use my project plan, then it would've been much more harder for them to understand them and then go towards another direction which could've resulted in a failed project. However, 2 people did say yes and a user said "Yes, by giving more details of how you managed your time". This user is trying to say that it was easy to follow but I should have given a more descriptive text on how I managed my time. My last question was, what improvements do you think I could've done? ...read more.

I had plenty of time to finish every documents without rushing and had made the schedule very tight and with colliding with my revision for my GCSE I believe that I was putting a lot of stress and believe that if I had used the spare days and extended my timescales on the project, then it would've been even more of a success because the I would have got plenty of time to do everything without being strict on how much time I will spend one document and how long I will take to go to the next document. Overall, I believe that not many mistakes and error were not made that I could improve on but nevertheless there were flaws and errors and If I had the chance to do it again then I would have had plenty of time to do everything and not sign of stress was not present when making the project. Conclusion After finishing the project, I could now see that the end result was a success. I have learnt that without the preparation plan of the project or the meetings and communications between the stakeholders, it would not have been a very good project and could have been an unsuccessful project. I believe that I worked independently throughout the whole project, so I think that I should receive an A* mark for it as my project had been entered as an A* so i hope that with my managerial skills of the project, I should get a good mark. ?? ?? ?? ?? Tahmid Ali 26186 ...read more.