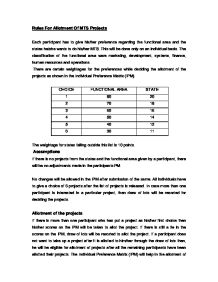 Rules For Allotment of MTS Projects.

Rules For Allotment Of MTS Projects Each participant has to give his/her preference regarding the functional area and the states he/she wants to do his/her MTS. This will be done only on an individual basis. The classification of the functional area were marketing, development, systems, finance, human resources and operations. There are certain weightages for the preferences while deciding the allotment of the projects as shown in the Individual Preference Matrix (IPM). CHOICE FUNCTIONAL AREA STATE 1 80 20 2 70 18 3 60 16 4 50 14 5 40 12 6 30 11 The weightage for states falling outside this list is 10 points. Assumptions If there is no projects from the states and the functional area given by a participant, there will be no adjustments made in the participants PM. No changes will be allowed in the IPM after submission of the same. All individuals have to give a choice of 6 projects after the list of projects is released. In case more than one participant is interested in a particular project, then draw of lots will be resorted for deciding the projects. Allotment of the projects If there is more than one participant who has put a project as his/her first choice then his/her scores on the IPM will be taken to allot the project. If there is still a tie in the scores on the IPM, draw of lots will be resorted to allot the project. If a participant does not want to take up a project after it is allotted to him/her through the draw of lots then, he will be eligible for allotment of projects after all the remaining participants have been allotted their projects. The Individual Preference Matrix (IPM) will help in the allotment of projects according to the preferences of the students and minimize the chances of a tie. This will also help in solving cases where more than one individual vies for the same project. ...read more.

as candidate B did not have the support of students from all over the states but he had with him a major portion of students from his state and they wanted that a candidate of their state to win. He had enough members from his state to make him win and many students thought that if candidate C wins then it will not serve the purpose because as he will not be selected because he is not favored by all but because all from his state were with him. This was the point the candidates A and D realized and they thought that only way to achieve their objective was to form a cartel. Now it did not matter to them who would win but they did not want the candidate B to win. Now they both would be satisfied if either of them would win. This was the understanding they had amongst them. The problem could have had a very simple solution by making candidate D withdraw from the race and he asking all his supporters vote for candidate A. This was also thought of but then candidate D had some supporters who did not want candidate A to win, had they been told to vote for candidate A they would have accepted this on the face but would have voted for candidate C. This could have made the candidate C the winner and he would have been successful in what he had thought when he took the decision to be in the race. To satisfy them candidate D stood all the time saying that it did not matter whosoever wins as long as either A or D wins. This was also serving the interest of candidate D as he had in his mind that he may win if only by chance but that would only be if at all by chance. He had to act in this manner and tell his core supporters that cooperation is symbiotic only on the face value but in reality he would win and the other candidate would suffer. ...read more.

750 and 1000 million US$ above the original price of 3000 and 4000 million US$ respectively. India and China now decide to collude amongst themselves to ensure that the price goes down. Their combined bargaining power would result in pile up of stocks, which would be impossible for the firms to off load in the market if they decided not to purchase. On the basis of their buffer reserves they decided to hold out on purchases as long as they buffer reached a critical minimum because by then the prices would crash. This way they did not have to succumb to arm twisting by the fertilizer cartel. They did not purchase for 3 weeks at a stretch and at the end of the period prices crashed to 150 US$ per tonne which was even before the initial level. Thus their payoffs after collusion came to around 2250 for India and 3000 for China which was 750 and 1000 million US$ below the initial price they would have to pay. This way the collusion resulted in maximization of benefit for both as their overriding objective of standing up to the cartel was met. The different payoff accruing to both i.e. more benefit to China and less to India was of no importance to either. Payoff Matrix: The matrix gives the payoffs of India and China in case of collusion and non-collusion. Application in terms of Battle of Sexes The outcome of the game is thus the distribution of the total available payoff amongst the two coalition members, which arose as a result of agreements between the players rather than as a predetermined consequence of their strategic choices. Both the players have perfect information about each other's strategies making the game a success. perfect information about each other's strategies. Since, the payoffs are assumed to be in monetary terms the coalitions acted by and large to maximize their joint payoff by coordinating strategies. It reflects the fact that in a hostile universe 'unity is strength'. ...read more.