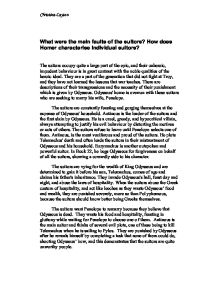 What were the main faults of the suitors? How does Homer characterise individual suitors?

What were the main faults of the suitors? How does Homer characterise individual suitors? The suitors occupy quite a large part of the epic, and their unheroic, impudent behaviour is in great contrast with the noble qualities of the heroic ideal. They are a part of the generation that did not fight at Troy, and they have not learned the lessons that war teaches. There are descriptions of their transgressions and the necessity of their punishment which is given by Odysseus. Odysseus' home is overrun with these suitors who are seeking to marry his wife, Penelope. The suitors are constantly feasting and gorging themselves at the expense of Odysseus' household. Antinous is the leader of the suitors and the first slain by Odysseus. ...read more.

The suitors want Penelope to remarry because they believe that Odysseus is dead. They waste his food and hospitality, feasting in gluttony while waiting for Penelope to choose one of them. Antinous is the main suitor and thinks of several evil plots, one of these being to kill Telemachus when he is sailing to Pylos. They are punished by Odysseus after he reveals himself by completing a task that none of them could do, shooting Odysseus' bow, and this demonstrates that the suitors are quite unworthy people. Eurymachus is a pathetic and cowardly suitor. He acts mean and vicious but when Antinous is killed he begs Odysseus for his life by trying to bribe him using money. Amphinomus seems to be the only suitor that actually makes a conscious effort to hold back the suitors from doing any more damage to Odysseus' home. ...read more.

Amphimodon is also characterised as an evil character with his depraved ways and treacherous plans of destroying Odysseus' household and taking everything. And finally Amphinomus is the other main suitor who in fact is nothing like the other suitors at all. In fact he is the kindest and most thoughtful, as at the end of the night, he is the one who sends the suitors home and he breaks up any fights before they even start. He is against the killing of Telemachus saying it is unworthy to kill a prince. Homer makes us feel compassion for him when he dies but also frustration because he does not accept Odysseus' warning and leaves when he is told. Christina Layton ...read more.