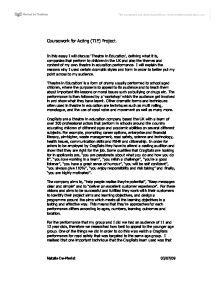 Coursework for Acting (TIE) Project. In this essay I will discuss 'Theatre in Education', defining what it is, companies that perform to children in the UK and also the themes and content of my own theatre in education performance. I will explain the reasons why I used certain dramatic styles and form in order to better put my point across to my audience. 'Theatre in Education' is a form of drama usually performed to school aged children, where the purpose is to appeal to its audience and to teach them about important life lessons or moral issues such as bullying or drugs etc. The performance is then followed by a 'workshop' which the audience get involved in and show what they have learnt. Other dramatic forms and techniques often used in theatre in education are techniques such as multi rolling, monologue, and the use of coral voice and movement as well as many more. CragRats are a theatre in education company based the UK with a team of over 300 professional actors that perform in schools around the country educating children of different ages and academic abilities on several different subjects. For example, promoting career options, enterprise and financial literacy, aimhigher, waste management, road safety, science and technology, health issues, communication skills and PSHE and citizenship. ...read more.

In our piece we used monologues at different times for each character because it gave the audience a chance to be told the characters emotions and how they were feeling about what they had done and if they had wanted to do it or not. This worked well because of the young age of our audience they may not have been able to understand some of the emotions that were being portrayed. Most of the monologues also slowed the pace of the story down, which again made it more suitable for a younger audience. The next device that we rehearsed was coral movement. We saw this in the CragRats performance and noted that it worked very well. Coral movement is where more than one person on stage does the same thing, moving in synch with another. The main reason we decided to use this technique was that it added a bit of humour to our performance, and therefore caught the audiences' attention and kept them interested and not bored. We also felt that it was something different to do. Coral speech was also something we saw in the CragRats play that we thought was a good technique. Coral speech is when more than one person on stage says lines in synch. ...read more.

After watching our performance, the messages that we wanted the audience to go away with were that lying can have devastating effects, and also that it affects a lot more people than the immediate. The audience seemed to have appreciated these messages and understood them well as we could tell this by the feelings and emotions that they showed during our workshop. Theatre in Education was not as I thought it would be. I thought that the audience would be harder to control however they were not and they listened excellently. I also thought that the 'circle time' workshop may not work, but it did as the audience opened up and joined in with everything we asked them to which is great. However some parts were more challenging than I thought they would be, for example coming up with the plot and then changing it in order to fit our audience as we wanted it to make perfect sense. This was hard because there were a lot of little things that needed a lot of thought and it was hard trying to find these bits that weren't suitable for their young age. It opened my eyes to how hard and what a skill it is to have to adjust your performance to suit different age categories. All in all I learnt a lot from doing this project and think it went well with the audience. www.cragrats.com ?? ?? ?? ?? Natalie De-Merist 03/07/09 ...read more.