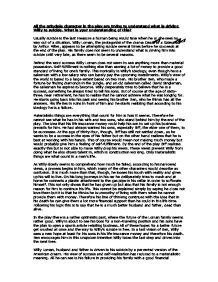 Death of a Salesman by Arthur Miller

All the principle character in the play are trying to understand what is driving Willy to suicide. What is your understanding of this? Usually suicide is the last measure a human being would take when he or she sees no way out of a situation. Willy Loman, the protagonist of the drama Death of a Salesman by Arthur Miller, appears to be attempting suicide several times before he succeeds at the end of the play. His family does not seem to understand what is driving him into suicide until very late, as there seem to be several reasons. Behind the word success Willy Loman does not seem to see anything more than material possession. Self-fulfillment is nothing else than earning a lot of money to provide a good standard of living for one's family. This ironically is Willy's ideology, even though he is a salesman with a low salary who can barely pay the upcoming installments. ...read more.

The idea that his life insurance money could help his son to set up his business prevails for him. He had always wanted his sons, especially Biff, the elder one of them, to be successes. At the age of thirty-four, though, Biff has still not settled down, as he wants to be a success in the eyes of his father but on the other hand realizes that he is best at working with his hands. This of course would mean not making much money but would probably give him a feeling of self-fulfillment. By the end of the play Biff realizes exactly this but is not able to make Willy drop his views. These views prevent Willy from doing what he also shows talent in, which is construction working. Only materialistic things are what count in a man's life. As Willy slowly seems to comprehend how much he failed, according to his narrowed views, a process begins in him, which many of the other characters would describe as confusion. ...read more.

In the play there is a rather optimistic part, where the future of the Loman family seems rather good. Willy is about to see his boss for a non-traveling position and his sons have the plan to open a sports article retailing business. All of these hopes for a better future get crushed at once and the way to Willy's suicide is free. In a last vision of Ben, Willy sees a new hope at least for his sons in his life insurance money and therefore his death. Ben encourages him in this unspoken intention Willy takes the last step and drives into the next tree. Willy Loman, husband and father is driven to his suicide by a perverted version of the American dream. His view of success and self-realization has reduced to a materialistic meaning. All he can see is his failure in providing his family with a good financial situation. His real failure, though, is not to see what he has in his family and what else he can give them besides money. ...read more.