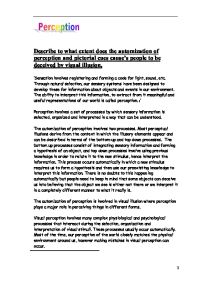 Describe to what extent does the automization of perception and pictorial cues cause's people to be deceived by visual illusion.

Describe to what extent does the automization of perception and pictorial cues cause's people to be deceived by visual illusion. 'Sensation involves registering and forming a code for light, sound, etc. Through natural selection, our sensory systems have been designed to develop these for information about objects and events in our environment. The ability to interpret this information, to extract from it meaningful and useful representations of our world is called perception.1' Perception involves a set of processes by which sensory information is selected, organized and interpreted in a way that can be understood. The automization of perception involves two processes. Most perceptual illusions derive from the context in which the illusory elements appear and can be described in terms of the bottom-up and top down processes. The bottom up processes consist of integrating sensory information and forming a hypothesis of an object, and top down processes involve using previous knowledge in order to relate it to the new stimulus, hence interpret the information. This process occurs automatically in which a new stimulus requires us to form a hypothesis and then use our preexisting knowledge to interpret this information. There is no doubts to this happening automatically but people need to keep in mind that some objects can deceive us into believing that the object we see is either not there or we interpret it in a completely different manner to what it really is. ...read more.

It refers to the tendency to visually perceive the object that produces the largest image as being closer. Height in the visual field refers to the location of objects in our visual field whereby objects which are located closer to the horizon are perceived as being further away than objects located away from the horizon. In the following paragraphs we can see how these various pictorial cues demonstrate how visual illusions are able to deceive people's interpretations. The Muller-Lyer illusion is a illusion in which one of the two lines of equal length, each of which has opposite shaped ends is incorrectly perceived as being longer than the other. Psychologists have had various explanations for this illusion. One approach is explained according to biological factors. We might have the tendency to misperceive simple, geometric patters which appear in 2D form. Psychologists can also explain this illusion through a cognitive approach and this suggests that this misinterpretation can occur due to the person not using appropriate mental stratergies when making a perceptual interpretation. The reason to why we misinterpret the length of the two lines can explained through how we incorrectly apply the principle of size constancy. This leads us to make an interpretation that when the two lines appear to be at different distances, and one that appears further away must be longer. ...read more.

There is a point of focus at the centre of the room. A person is placed in the corner on the smaller side of the room, and another person of the same height is placed in the corner of the bigger wall. The object beside the people will depend on where they are standing. The person standing at the small wall will have objects that are smaller object then themselves, next to them and vice versa. Once this is all put together using size constancy, the illusion is complete. Therefore, the person at the smaller corner is perceived as larger then the person at the long wall. The room is distorted. But viewed with one eye through a peephole, its trapezoidal walls produce the same images as those of a normal rectangular room viewed with both eyes. Presented with the camera's one-eyed view, the brain makes the reasonable guess that the room is normal and perceives the people as changing size. As we can see, pictorial cues play a major role in the automization of perception. When these cues are applied to objects they seem to allow people to believe what they are seeing must obviously be accurate. By applying these pictorial cues people do not focus on performing a hypothesis, and following a procedure in order to reach a conclusion, however with the aid of pictorial cues believe that there interpretations seem to be rational. ...read more.