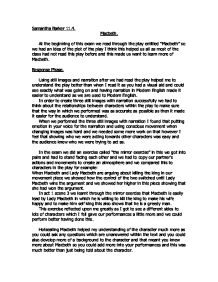 At the beginning of this exam we read through the play entitled “Macbeth” so we had an idea of the plot of the play I think this helped us all as most of the class had not read this play before and this made us want to learn more of Macbeth.

In order to create three still images with narration successfully we had to think about the relationships between characters within the play to make sure that the way in which we performed was as accurate as possible as then it made it easier for the audience to understand.

When we performed the three still images with narration I found that putting emotion in your voice for the narration and using conscious movement when changing images was hard and we needed some more work on that however I feel that showing who we were acting towards other characters was easy and the audience knew who we were trying to act as.

In the exam we did an exercise called “the mirror exercise” in this we got into pairs and had to stand facing each other and we had to copy our partner’s actions and movements to create an atmosphere and we compared this to characters in the play for example:

In act 1 scene 3 we learnt through the mirror exercise that Macbeth is easily lead by Lady Macbeth in which he is willing to kill the king to make his wife happy and to make him self king this also shows that he is a greedy man.

This exercise reflected upon me greatly as I got to see a different sides to lots of characters which I fell gave our performances a little more and we could perform better having done this.

Hotseating Macbeth helped my understanding of the character much more as you could ask any questions which are unanswered within the text and you could also develop more of a background to the character and that meant you knew more about Macbeth so you could add more into your performances and this was much better than just being told about the character.

What we discovered about Macbeth as a result of hotseating:

In act 1 scene 7 we used thought tracking, soundscape’s and abstract movement to explore the thoughts and inner turmoil in Macbeth’s mind and I fell that all f these strategies helped my understanding as I could discover more sides to Macbeth’s character which enhanced my performance when I was in his role. I discovered in this that Macbeth is a greedy man as he wants to kill a friend and a loyal boss just so he can have more power and be crowned king.

In groups of three we identified and marked the moment that represented the struggle in Macbeths mind, we identified this moment by reading extracts and finding that moment, we found it as it was significant as it showed Macbeth talking to himself arguing with his conscious not knowing what to do that’s why we chose this scene.

Within this whole exam I feel that “the mirror exercise” helped me most to gain an insight into the characters of Macbeth and Lady Macbeth. I think that this whole experience has helped me to understand the life and times that William Shakespeare wrote this as I can see that it is easy to get away with murders as there was no authorities like the police like we have today which shows it was a dangerous time and a lot has changed since then. Empathy to see and feel someone else’s point of view is so important not only for an actor but for society in general as if you do not always see eye to eye and you cannot compromise friction between people enter and this is when fights and disagreements all break out so it is important as you can then have a conversation and the tone of your voice can reflect upon that which helps keep the peace.

We looked at act 1 scene 3, this is when Macbeth meets the three witches for the first time and also when he is told that he will be Thane of Cawdor and the king, here is how I think Macbeth would have felt about this, his thoughts on this life changing news:

Thane of Cawdor? How can that be there is already a Thane of Cawdor. To be king wow that would be great but how do I achieve that? These women cannot speak truth there is no way this can come true, but what if they speak true and I can become Thane then king ? I must tell my wife!

From the above in which I have just written I will now bullet point how I feel I would perform the extract above:

We used drama to create our own version of act 1 scene 3 we used props symbolically within this scene for example:

Drums to create the drum sound in the text, black cloth to show the darkness of the witch’s growing closer towards Macbeth.

In this scene we tried to replicate Macbeths temptation when the weird sisters are telling him all him becoming Thane of Cawdor and king as in our group we felt that it was important to show his lust for the titles of Thane and King so we tried to show that the weird sisters are making his lust worse as they say he can be Thane and king so in a group we felt that the weird sisters were responsible for his temptation  but also he controls this so in a way they are both responsible for the temptation towards the titles and thought that somehow they could be like a mirror to his own soul as he wants to be Thane and king but does not show it only deep in his soul so they are showing him this and he knows that it what he wants and what he lusts for in his soul. I feel that a twenty first century interpretation of the text would be very different to that of Shakespeare’s age when witch’s were considered to be real as today people would think nothing of someone saying that they would be Thane and king as there is no such thing as witches known in present times so Macbeth in present time would not be as spooked and as tempted as there is no fear in what they say today.

If I could develop this drama through the use of costume, stage design, special effects and props I would have used lighting so that every so often when the witches finished a sentence they flashed so it gave the effect of lighting and mystery and to give the atmosphere of storm I would also use black clothes with were ripped and look dirty and for Macbeth I would wear battle clothes like armor as they had just come from battle in this scene.

When creating this movement piece from act 1 scene 7 I feel it gave a great sense of how Macbeth was feeling and gave an idea of the thoughts going through his mind as he is drawn to what the witches are saying but backs away when in his mind he thinks it may happen and he becomes overwhelmed with the thought. I feel we could have developed this further by the speed in which Macbeths walks toward the witches and when he backs away as the tempo and rhythm of that could make the audience engage more with his thoughts, also using contrasts as in the stillness when Macbeth backs away to when he was all excited to hear he will be king when he is very active, using spoken language in this piece may have made this better as some members of the audience may not have fully understood what was going on within this piece.

If we were to use our movement piece and turn it into a naturalistic role-play I would design the stage as a dark stormy sky as the witches bring storms and the blackness can symbolize evil being the witches.

Within this role-play I would have to think about spoken language between the characters including gestures and how they should show how they really feel with body language and where the climax of the whole scene should be in order to make it work.

Acting out the text using Shakespeare’s language was very challenging and difficult to master and I would need a lot of time to get it perfect. If I had a week to rehearse a scene I would pick the very first one in the play when you meet the witches for the first time as I think this sets the scene for the rest of the play, in this I would use my voice to project over the whole of the stage when needed to create a sense of the witches being mysterious and my body language would be very bizarre as the witches move like this to create a strange atmosphere.