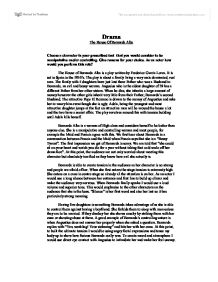 The House of Bernarda Alba

Drama The House Of Bernarda Alba Choose a character in your prescribed text that you would consider to be manipulative and/or controlling. Give reasons for your choice. As an actor how would you perform this role? The House of Bernarda Alba is a play written by Frederico Garcia Lorca. It is set in Spain in the 1930's. The play is about a family living a very male dominated, rual area. The family with 5 daughters have just lost there Father who was a Husband to Bernarda, an evil and bossy woman. Angusius who is the eldest daughter of 39 has a different Father from her other sisters. When he dies, she inherits a large amount of money however the other girls inherit very little from their Father; Bernarda's second Husband. The attractive Pepe El Romano is drawn to the money of Angustius and asks her to marry him even though she is ugly. ...read more.

Bernarda is able to create tension in the audience as her character is so strong and people are afraid of her. When she first enters the stage tension is extremely high. She enters on a cane in centre stage so already all the attention is on her. As an actor I would use a long silence between her entrance and first line to build up climax and make the audience very nervous. When Bernarda finally speaks I would use a loud volume and superior tone. This would emphasise to the other characters an the audience that she is the boss. "Silence" is her first word and also her last so it has particularly strong meaning. Having five daughters is something Bernarda takes advantage of as she is able to control them against having a boyfriend. She forbids them to sleep with men unless they are to be married. ...read more.

When Bernarda tells the Maid "lock her up!", as an actor I would use a tall, high standing posture to emphasise how high above everyone else Bernarda thinks she is. If Bernarda thinks it is alright to lock her Mother away then she must be extremely inconsiderate. Facial expressions are important to show Bernarda's feelings and emotions. As an actor, to show these clearly I would use rolling eyes so the audience see how Bernarda thinks her Mother is being pathetic. Turning Bernarda's head away from the situation may communicate the message of heartlessness to the audience which is exactly the mood and atmosphere needed for this particular scene. Here, I would use the whole stage so the Maid knows who is in control and knows not to disobey her. To conclude, Bernarda's movement and voice are very important to create maximum tension in the audience. Mood and atmosphere is essential and can be achieved through many techniques to prove what an evil person Bernarda is. ...read more.