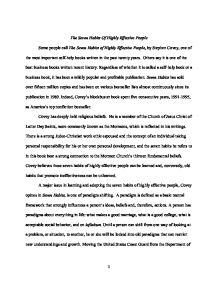 The Seven Habits Of Highly Effective People Some people call The Seven Habits of Highly Effective People, by Stephen Covey, one of the most important self-help books written in the past twenty years. Others say it is one of the best business books written recent history. Regardless of whether it is called a self-help book or a business book, it has been a wildly popular and profitable publication. Seven Habits has sold over fifteen million copies and has been on various bestseller lists almost continuously since its publication in 1989. Indeed, Covey's blockbuster book spent five consecutive years, 1991-1995, as America's top nonfiction bestseller. Covey has deeply held religious beliefs. He is a member of the Church of Jesus Christ of Latter Day Saints, more commonly known as the Mormons, which is reflected in his writings. There is a strong Judeo-Christian work ethic espoused and the concept of an individual taking personal responsibility for his or her own personal development, and the seven habits he refers to in this book bear a strong connection to the Mormon Church's thirteen fundamental beliefs. Covey believes these seven habits of highly effective people can be learned and, conversely, old habits that promote ineffectiveness can be unlearned. A major issue in learning and adopting the seven habits of highly effective people, Covey opines in Seven Habits, is one of paradigm shifting. ...read more.

Covey believes that the term "time management" is actually a misnomer; that is, the challenge is not how to manage time, but rather how to manage ourselves. One of the central themes of the book is finding the correct P/PC balance. If we cannot manage ourselves, and our time, we will never be able to maintain proper Production. The "P" refers to production and the "PC" refers to production capability. He illustrates this P/PC dichotomy by using a machine as an illustration. If you ruin a machine twenty-four hours a day, seven days a week, fifty-two weeks a year you will get great production initially, but eventually that machine will break down and be ruined or need repair. If, however, you run the machine on a regularly scheduled maintenance basis, you may not achieve the same production numbers as a machine being continuously used, but it will not suffer major breakdowns and over the long run the production will be greater. Habits of Interdependence. * Habit #4. Think Win-Win. This is a habit that encourages you to seek solutions of mutual benefit to all parties concerned, as opposed to win-lose situations where one person wins and the other person loses. Covey illustrates this habit by asserting that a powerful programming agent early in life is athletic competition where students develop a basic paradigm that life is a zero sum game; that is, if someone wins, someone must lose. ...read more.

In high school, when my father first introduced me to this book, I was rather disorganized and somewhat chaotic in ordering my priorities. Although I had never read it, my father explained parts of the book well enough so that I could benefit from some of its knowledge. I distinctly remember filling out the time matrix chart introduced in Habit 3 and discovering most of my activities fell into Quadrant I. It was obvious I was not planning my activities, but rather reacting to events as they occurred to me. Subsequently, I have tried to keep my activities in Quadrant II, with varying degrees of success. As I move from the Academy into the non-academic world I believe Covey's admonition in Habit 5 to "seek first to understand and then be understood" will gain greater importance in my life. Realizing that my paradigms may not be someone else's paradigms, or my paradigms might have been right at one time, but the passage of time requires me to re-examine the conclusions I have reached, will be a prime requisite to effective leadership. I believe that Seven Habits of Highly Effective Leaders will be one of those books that will stay on my bookshelf for years to come and I will revisit it countless times to reread selected passages, not just to reinforce what I remember Covey saying, but to apply his timeless wisdom to new situations I encounter in whatever career I choose. 1 ...read more.