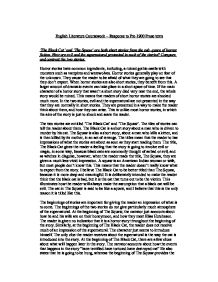 &amp;#145;The Black Cat&amp;#146; and &amp;#145;The Squaw&amp;#146; are both short stories from the sub-genre of horror fiction. How are evil and the supernatural presented in each of the stories? Compare and contrast the two stories.

English Literature Coursework - Response to Pre-1900 Prose texts 'The Black Cat' and 'The Squaw' are both short stories from the sub-genre of horror fiction. How are evil and the supernatural presented in each of the stories? Compare and contrast the two stories. Horror stories have common ingredients, including, a ruined gothic castle with monsters such as vampires and werewolves. Horror stories generally play on fear of the unknown. They cause the reader to be afraid of what they are going to see that they don't expect. When horror stories are also short stories, they benefit from this. A larger amount of dramatic events can take place in a short space of time. If the main character of a horror story that wasn't a short story died very near the end, the whole story would be ruined. This means that readers of short horror stories are shocked much more. In the two stories, evil and the supernatural are not presented in the way that they are normally in short stories. They are presented in a way to make the reader think about them, and how they can arise. This is unlike most horror stories, in which the aim of the story is just to shock and scare the reader. The two stories are entitled 'The Black Cat' and 'The Squaw'. The tiles of stories can tell the reader about them. The Black Cat is a short story about a man who is driven to murder by his cat. The Squaw is also a short story, about a man who kills a kitten, and is then killed by its mother, in an act of revenge. The titles mean that the reader to has impressions of what the stories are about as soon as they start reading them. ...read more.

This feeling of someone deserving an act of revenge adds to the horror theme of the story. The only shock in the story is when the kitten is killed. For these reasons, the usage of shock and surprise in the two stories is very different. The two men who kill the cats in the two stories have very important roles in the plot, as do their characters. The narrator in The Black Cat seems very emotional. He often confides in the reader about how The Black Cat drives him to insanity, whereas Elias P. Hutcheson is not given a particularly prominent character, and the reader does not learn much about his emotions. In The Black Cat, the narrator is used as the main character, to confide in the reader, about his experiences. In this way, the author brings about the questions about evil and the supernatural. In The Squaw, Hutcheson is instead used as a tool for the plot to be developed. He doesn't have any visible emotions shown. He seems only to be in the story to kill the kitten, and then to be killed at the end. The reader feels sorry for the narrator in The Black Cat, because he is driven to madness and he is very hopeless, but they also feel hatred for him because of all of the cruel things he does. The cats are probably the most important elements in both of the stories. In The Black Cat, the cat is initially introduced amongst the narrator's other pets, and in The Squaw, the cat is introduced when the characters see it with its kitten. Unlike at the beginning of The Squaw, at the beginning of The Black Cat, the reader is given a small hint of the supernatural powers of the cat, in the title, because black cats are said to be bad luck, and witches in disguise. ...read more.

and I believe that his purpose in writing The Black Cat was to give an insight into the mind of someone who goes mad. I believe he wanted to show that people are driven to do evil things, and they do not just suddenly turn evil and crazy. He wanted to show that evil people are people too, like everyone else. This does not fit the general trend in horror stories very well. Usually, the evil character is just there to be someone for the reader to dislike and fear. The reader is never usually shown any reason for the person to have become evil. Stoker believes that evil is not always how and where it seems, as Poe also does, and I believe that he wrote The Squaw to show this. This fits the horror story genre in the same way as The Black Cat does because it is not like most horror stories. Like The Black Cat, it depicts a different meaning to evil and the supernatural, and it doesn't rely on clich�s. I believe that evil and the supernatural are well presented in the both of the stories. Both of the authors wrote the stories to give a deeper meaning to the way they are depicted in horror stories. Neither of the two stories is typical of the horror story genre. They are both deliberately meant to show the different ways that evil and the supernatural can exist, that are not usually depicted in horror short stories. I believe The Black Cat to be the more effective as a horror story. The way it depicts the mind of a madman is more effective in horrifying the reader. His feelings and reactions give the reader a chilling and disturbing insight into the mind of an evil, twisted murderer. ...read more.