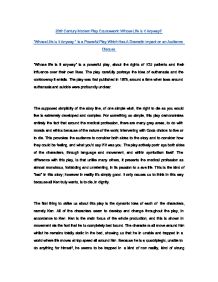 20th Century Modern Play Coursework: Whose Life Is It Anyway?

20th Century Modern Play Coursework: Whose Life Is It Anyway? "Whose Life Is It Anyway " is a Powerful Play Which Has A Dramatic Impact on an Audience. Discuss. "Whose life is it anyway" is a powerful play, about the rights of ICU patients and their influence over their own lives. The play carefully portrays the idea of euthanasia and the controversy it entails. The play was first published in 1978, around a time when laws around euthanasia and suicide were profoundly unclear. The supposed simplicity of the story line, of one simple wish, the right to die as you would live is extremely developed and complex. For something so simple, this play demonstrates entirely the fact that around the medical profession, there are many grey areas, to do with morals and ethics because of the nature of the work; intervening with Gods choice: to live or to die. This provokes the audience to consider both sides to the story and to consider how they could be feeling, and what you'd say if it was you. The play actively portrays both sides of the characters, through language and movement, and within symbolism itself. ...read more.

Dr. Emerson: No. Ken: Or recover the use of my arms? Dr. Emerson: No. Ken: Thank you. " This insight into Ken's character comes accurately and shows us exactly, the extent of his injuries, and the seriousness of them. So this, in turn with many other statements makes us think that in calmly choosing to die, he is making the wrong decision, that he is going mad. However perhaps, by choosing to stay alive, with his level of intelligence, and no means to function as a human being, perhaps that in itself is insanity. He lies in his bed, calmly thinking, making his choice to die, watching time just drift by, slowly, and he is powerless to stop it. He is trapped in a limbo; a strange half life with no means to do anything, and the knowledge that in his soul, he is dead. The medical profession represents a very controversial view of moral and ethics in relation to the medical world and the way that its passion to save life occasionally interferes with freewill. Supposedly God decides when you live or when you die. So when medicine intervenes in issues that shouldn't be changed, especially against the will of those involved. ...read more.

Emerson and his team of professionals weakens his case; he could be portrayed as insane for the simple questioning of a doctor. Professionalism plays an important part of this play; Brian Clarke incorporates a kind of element of scepticism, because of the way paranoia is presented in each case. Ken is presented as paranoid, because of his reaction to the prescription of valium; in comparison, Dr. Emerson's obsession with Ken's psychiatric state, is simply professionalism. It seems to be a double standard; it all depends on where you put it. Clare Scott, the doctor below Dr. Emerson is another key component to this magical piece of drama. She is more compassionate, and as the play evolves around the situation, we see a kind of understanding that she develops in relation to the situation surrounding Ken. She is effectively a softer, more sensitive version of Dr. Emerson. She seems to understand Ken more emotionally, and perhaps since she has been portrayed as a very soft touching, professional woman, perhaps she is meant to be portrayed as his fairy god mother. In conclusion, "Whose Life Is It Anyway" is a dynamic, play. The way in which Brian Clarke portrays each character, in their own way, causes an audience to think beyond the obvious, where euthanasia is concerned. [MRS WALLIN: I think that it's a little bit incomplete...could I tweak it?]] ...read more.